Review: All the Windwracked Stars by Elizabeth Bear 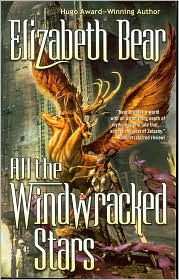 “At the closure of the slaughter, there remained upon the strand
One who fled, one who lived, one who chose not to attend…

So the Children singing came all to the slaughter
Stars and shining suns, sons and shining daughters…
And all the windwracked stars are lost and torn upon the night
Like candleflames they flicker, and fail to cast a light.

There is something about a post-apocalyptic/apocalyptic, Sci-Fi Fantasy story that does it for me – mix in some Norse mythology and it’s a win-win situation. Elizabeth Bear’s All the Windwracked Stars has all of the above and more. She uses mythology loosely to construct her world and if you are familiar with Odin’s crew of Gods and immortals, you will recognize their integration into Bear’s world, her characters and usage of language.

Our fantasy adventure begins with the end. It’s the end for the Children of Light and their world – survived only by Muire, a waelcyrge (valkyrie), and Kasimir, a valraven (two-headed, winged, war-steed). Muire, who thinks of herself as the “least” of all her sisters, is not a warrior; instead she is a poet, historian and artist. She survives by fleeing that final battle where all her sisters and brothers – the einherjar or immortal warriors -- die. That single act of cowardice, the guilt and shame Muire carries with her, become the driving force behind her actions throughout this story.

Fast forward twenty three hundred years later and the world is again dying. This time, surprise, surprise it is a world of men, who after rising and inventing medicine, philosophy, space flight and metallurgy now live in an era known as the Desolation, under the Defile – a contaminated earth full of deserts and bleached bones, un-breathable air and a dead sea killed by bio-weapons and never ending wars. Only one city remains, Eiledon.

When Muire finds a truman dying in the shadows of darkness, with no traces of blood or bodily harm, she recognizes the manner of death and knows the killer. An old, powerful evil from long ago has returned and she must hunt it and kill it, or die trying.

The gloom and doom that permeate the world Bear constructs makes this a tough read through the first third of the book. Muire’s self-recrimination, guilt and sense of worthlessness, while understandable, were tough to deal with at times. Thank goodness for Kasimir who serves as her conscience and represents the hope and promise of a possible future. He has the faith in Muire that she doesn’t have in herself, and recognizes the courage and Light she possesses. Although Muire is the main character, and a strong one at that, once Bear’s well-developed and fascinating secondary characters start to emerge, I became immersed in her world. They were the ones that made this story work for me.

Thjierry Thorvaldsdottir, Technomancer of Eiledon, is known as the savior of the dying city. A combination techie/witch, she reigns supreme in the Tower, a floating bubble-like city she created – a city above a city -- adored by her students and guarded by loyal servants, the moreau or unmen -- animals with human-like abilities. Thjierry and Muire might be the only hope left for Eiledon. The unmen play a small, if key, part in the story. Selene, the cat girl with her claws, whip and smarts, is the most memorable of the unmen characters. I was touched by her toughness, vulnerability and courage – a definite reminder of H.G. Wells’ “The Island of Dr. Moreau.”

Mingan, the Grey Wolf is a tarnished predator, traitor to all, but most of all to himself. He is a dark, fascinating character that took hold of my imagination and didn’t let go, even after the book was finished. Possibly my favorite in this book, his is the character that brings us the closest to the tragedy and duality that we often find in Norse mythology. Based on a cross between Fenrir the Wolf and Hati, the sun-eater, Mingan, together with Cathoair, a young male prostitute and bar fighter, take over the page whenever they appear. Theirs is a complex relationship --Mingan hunts Cathoair, whom he both loves and hates and in turn, Cathoair haunts Mingan. Cathoair is both more and less than he appears to be. By becoming important to both Muire and the Grey Wolf, he also becomes a catalyst and central to this story.

As the story unfolded, defining the Dark and the Light became difficult, gray areas expanded and I found myself reading slower, savoring every moment, not wanting the book to end. And as I concluded my journey with Muire and her ragtag group of friends and foes, after experiencing depths of despair and selfishness, the power of friendship and love, I found that in the end, this book was mostly about redemption and self-sacrifice.

There is potential in this world for other great adventures. Hopefully, Elizabeth Bear will give us more. If you like Fantasy, Sci-Fi and mythology, this book is certainly for you.

Originally posted at Musings of a Bibliophile April 17, 2009
Posted by Hilcia at 7:11 PM

Email ThisBlogThis!Share to TwitterShare to FacebookShare to Pinterest
Labels: 2009, Elizabeth Bear, Grade B, Musings of a Bibliophile, Reviews, Sci-Fi/Fantasy