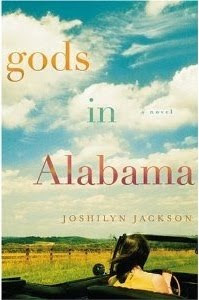 When Arlene Fleet headed off to college in Chicago, she made three promises to God: She would never again lie, she would stop fornicating with every boy who crossed her path, and she'd never, ever go back to her tiny hometown of Possett, Alabama (the "fourth rack of Hell"). All God had to do in exchange was to make sure the body of high school quarterback Jim Beverly was never found.

I read Gods in Alabama by Joshilyn Jackson when it was first released in 2005. It was Ms. Jackson's debut novel and one that made my keeper shelf for different reasons. This is a women's fiction book, but it's also considered "Southern Fiction." Ms. Jackson is from the South and those roots can definitely be appreciated and recognized in her writing, characterization, subject matter and humor.

Gods in Alabama is one of those books with an unforgettable first line, one that "hooked" me into reading it and became engraved in my mind. Every time I looked at my bookshelf and saw the title of the book, I remembered it.


"There are gods in Alabama: Jack Daniel's, high school quarterbacks, trucks, big tits, and also Jesus. I left one back there myself, back in Possett. I kicked it under the kudzu and left it to the roaches..."

Thus begins this complex story written in first person as seen through Arlene Fleet's point of view. Lena left Possett, Alabama for Chicago ten years ago right after high school. At that time, she made a deal with God: she would not have sex, would never lie, and would never again return to Possett, Alabama as long as that one "god" she kicked under the kudzu and left to the roaches was not discovered.

For ten years the deal held up, she's now a teacher's aid at a local University and working on her PhD. Lena's African American boyfriend loves her and because he's also the son of a Baptist preacher, he seems to understand and goes along with her need for celibacy. But all of that is about to come to an end when to Lena's great surprise and frustration, Rose Mae Lolley from Possett shows up at her door with a question that Lena will not and cannot answer -- and Lena can't lie. Against her better judgment, Lena finds that after all these years she must return to Possett, Alabama to head off the troubles that Rose Mae Lolley brought back to her door. To Lena's way of thinking, God broke their deal.

Joshilyn Jackson begins this story at the end and works her way to the beginning of the story, making the beginning, the end. I remember the first time I read this book not being able to put it down because I wanted to know what happened in the beginning. It's fast paced, with only a couple of slower chapters in the middle and then picks up again to the end. We get to know what happens to Lena through some flashbacks, confrontations with her family, and Lena's dialogue with her boyfriend, Burr. It was a fascinating ride to the surprising twist in the end the first time, and an even better ride the second time around for me.

Gods in Alabama is an interesting mixture of heavy subjects and witty, humorous prose. Through Lena's guilt-ridden eyes and conscience, Jackson tells a story full of family conflicts, murder, rape, racism, guilt, redemption and immense love. She throws in a bi-racial romance and sets it all in a small southern town full of unforgettable characters. But, the best part of this book is that while reading about all these heavy subjects, all of which she addresses fully and without reserve, there is not a "heavy" feel to this book.

Jackson uses her gift for humor and wit to tell Lena's story and the writer's southern roots definitely show in the telling. There no such thing as southern "flavor" in this book, there is much more than that. The way she describes the setting, the usage of language and humour make you feel as if you're right there in Possett and these elements make the story come alive. The characterization was excellent in most instances, however in some cases she seemed to gloss over the characters and they came off a bit stereotypical. Lena and Aunt Flo's characters were flawlessly developed, but I do wish that cousin Clarice had been better drawn. She was an important character in this story whose motivations stayed 'sketchy' in my mind, both through my first read and this time around.

I thought Gods in Alabama was an excellent debut novel for Joshilyn Jackson. Then and now, I loved her gift for telling this type of story with wit and humour. I enjoyed Ms Jackson's writing style and meant to follow up on her other releases. I'm sorry to say I didn't. However, re-reading this book made me look her up again and it turns out that she now has a backlist I can enjoy. I'm interested in reading her second release, Between, Georgia. Also, this is a huge coincidence, but she has a new book Backseat Saints coming out June 8, 2010 featuring Rose Mae Lollie and I'll definitely be reading that one.