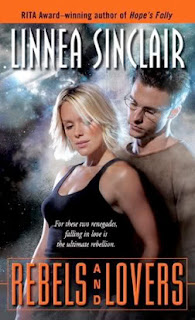 Rebels and Lovers is a good addition to the Dock Five series by Linnea Sinclair. The book felt a bit like a transitional book in the series, but by the end it advanced the overall storyarc -- the war between the Empire and the Alliance. By focusing in the all important and powerful Guthrie family, Sinclair tipped the odds.

The above summary is really very accurate. Devin and Kaidee have known each other for years. He burned for her secretly then and has been dreaming of her ever since. Years ago her husband was fired and she chose to go with him, and Devin thought he would never see her again. But now that he's found her and she is a widow, Devin does everything to keep and win Kaidee.

Kaidee always thought highly of Devin. She sees him as a controlled, almost perfect man whom she respects and finds very attractive -- for her, he is also an impossible dream. To her way of thinking, she is not the type of woman a Guthrie would ever regard as an appropriate companion -- not with her history, her family, or her murky past.

I liked both characters. Devin is more beta than alpha... he doesn't remind me of Sully or Phillip. He's a thinking, numbers man, not a man of action, although he knows how to take care of himself. Sinclair balanced his character quite well on that front. I loved the way he yearned for Kaidee and his willingness to change his circumstances for her -- Devin the rebel. Kaidee is also unique to this series. She's a Captain and has certain qualities that do remind me of Chaz, but very few. She was a combination of tough and vulnerable that was perfect for Devin and for the situation. What Devin lacked, Kaidee had in spades and vice versa. She also has an interesing background and I'm curious to see how the Alliance uses her unusual contacts.

Rebels and Lovers begins as a fast paced book. I was caught up in the action -- Trip's disappearance, Devin's pursuit and Kaidee's situation in Dock Five. There are multiple characters introduced, some quite interesting, and we are reacquainted with old characters. Devin and Kaidee's paths cross in Dock Five and their race to save Trip is on. The action continues and it's pretty intense, with lots of twists and turns until they get off Dock Five -- this takes the first half of the book.

Overall, Rebels and Lovers was a good read with a lovely couple, an excellent first half full of fast paced action, and a second half, that although necessarily slow paced for development, went on a bit too long. The book had an exciting, fast paced resolution and it ended on a high note -- it looks as if the Alliance and the Empire are jockeying for position. Although frankly, Rebels and Lovers did not have that exciting WOW factor that Gabriel's Ghost-Book 1, Shades of Dark-Book 2 and Hope's Folly-Book 3 had for me, it was still a solid addition to this series and I can't wait for the next installment.

Visit Linnea Sinclair here.
Posted by Hilcia at 11:10 AM