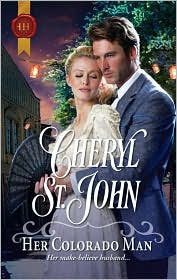 When eighteen-year-old Mariah found herself pregnant and unmarried in her small Colorado town, she disappeared. One year later, she returned with a baby—though minus the "husband" who had conveniently ventured off to Alaska's gold fields to seek his fortune….
But now, with handsome adventurer Wes Burrows turning up and claiming to be the husband she had invented, Mariah's lies become flesh and blood—and her wildest dreams a reality!

I finally read Her Colorado Man by Cheryl St. John, a Harlequin Historical I've had on my "to be read" pile since it released last December. I loved her book, Joe's Wife and have begun collecting some of the books in her backlist already. She also has a new book this month, To Be a Mother and I'll definitely be adding that one to my pile as well.

Her Colorado Man is the story of a young woman in 1800's Colorado who gets pregnant out of wedlock. Her grandfather sends her away to Chicago to have the baby and tells the rest of the family and the community that she met and married a man there, Wes Burrows. This man then left Mariah and their newborn child for Alaska to seek his fortune looking for gold.

Unfortunately, the name grandpa uses is the name of a "real" person. Through the years, grandpa's old friend Otto writes letters to the young boy pretending he is the father who is away in Alaska. When Otto dies, the "real" Wes Burrows receives the letters and through their correspondence falls in love with the boy. Wes then decides to come "home" to meet his son and to be a "real" father to a boy who he feels needs him. Of course, he doesn't take into account that a wife comes with the son too.

In Wes, St. John creates a tough, but sensitive male character who needs as much as he is needed. I was touched by his sensibilities, his need for love and family and willingness to give. Wes is a "good" man. Mariah on the other hand, is a woman who is ahead of her time, but also very much of her time. She has an outward toughness that hides her inner vulnerabilities. Mariah is independent within her family circle, but is very much restrained by her gender and circumstances. She is trapped by both and her independence is almost an illusion until Wes comes along.
This was a touching story. St. John begins this romance by having Wes fall in love with the boy first, then with the extensive Spangler family, and at last with Mariah herself. Mariah is understably weary of Wes and really doesn't understand what he wants -- this stranger who comes out of nowhere and whom she has to accept or break her son and family's hearts by revealing her lie. She is quite ruthless with Wes for a long time, even when he is a gentleman and a sweatheart. I think her reactions are quite understandable under the circumstances.
The book is warm on the sensual scale and excellent when it comes to characterization. St. John really takes her time when it comes to developing the protagonists and their romance. She gives you the reasons behind both Mariah and Wes' motivations as we get to know their past histories -- some of which are complex, especially when it comes to Mariah's past experiences. The author also takes the time to develop the large cast of characters that make this story what it is, the Spangler family in particular. Through them, she also explores the setting and historical times by cleverly using the family's ties to the brewery industry to do so.

A well written and developed Harlequin Historical, with excellent characterization, Her Colorado Man was an enjoyable read for me. I loved the clever way in which the setting and history were incorporated into the story, as well as the sense of family and the unique way in which it influenced this romance.

KMont's 2010 Year of the Historical Challenge - April Review
Posted by Hilcia at 12:40 PM