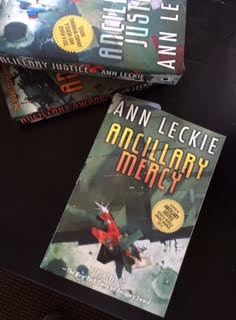 Well, the Imperial Radch trilogy by Ann Leckie is done, and what a glorious ride it has been! In Ancillary Mercy, Ann Leckie brings the story back to the beginning by wrapping up threads, answering questions, and finding resolutions to issues that began in Ancillary Justice and Ancillary Sword. And that, my friends, is one of the great aspects of this trilogy because, although different in plot and atmosphere, Books 1 & 2 are extremely relevant to the highly satisfying end.

The story picks up where it ended in Ancillary Sword, as Fleet Captain Breq Mianaai recovers in Mercy of Karl quarters, with Captain Seivarden Vendaai serving her, the always-needed, required, revered, solver-of-all-problems, tea. It doesn't take long, however, for things to change and speed up as, first, Breq is summoned down to station by the Governor to find an ancillary under custody. She is an ancillary fragment from the Notai ship Sphene, last seen over 3000 years ago. This new character, a vengeful and mistrusting Sphene, adds a whole new dimension to the story.

Closely following this news, Presger Translator Zeiat shows up looking for the previous Translator who was sort-of-accidentally-shot-dead in Ancillary Sword. This character not only adds humor through "cultural misunderstandings," but also provides that alien element in spades. Zeiat is deceivingly friendly and bumbling in her attempts to experience and navigate the human world. Yet, when she attempts to communicate thoughts or opinions about weighty subjects, it becomes clear that she/they (the Presger) do not really understand humans. And, humans don't seem to understand just how fragile and thin the treaty keeping them safe from this predatory alien species has become.

Soon after, a single segment of the many-bodied (self-cloned) Anaander Mianaai shows up at Anthoek Station, looking for Breq, and accompanied by two ships. The tyrant's presence sets up a confrontation between the adversaries, and it takes action in form of a battle, political maneuvering, as well as masterful manipulation, to bring it all to a satisfying end. One segment when the tyrant is many-bodied, you ask? Leckie does it! Read the book and find out… it's a noteworthy resolution.

And speaking of noteworthy, remember those fantastic relationships that Leckie builds in Ancillary Justice and continues to build along the way? Throughout her evolutionary journey, Breq has gained much self-awareness, yet in Ancillary Mercy she comes to some highly emotional conclusions, finding flaws and much needed clarity. Then there is my favorite secondary character, Seirvarden Vendaii, who makes a truly emotional impact in this last installment. Breq's journey would not have been the same without Seivarden, the same applies to Seivarden's journey. Here we see her battle addiction, character weaknesses, failures, and can't help but root for Seivarden as we witness her dependency, love, and affection for Breq. I love the resolution to their flawed, but warm, mutually satisfying relationship.

There are other significant relationships worth mentioning, as well as small details of daily life Leckie incorporates into this space opera. From the secondary and tertiary characters, I enjoyed getting to know Karl Five, Breq's personal attendant, with her priceless white porcelain tea set, her pride, and the stoic love/admiration she felt for Breq. I loved Mercy of Karl or Ship's and Station's strong voices and feelings, as well as, Breq's relationship with the always emotionally conflicted Lieutenant Tisarwat. However, those small details mentioned above complete relationships and fully realize this world: the makings of tea, the significance placed on different tea sets, the sharing of a favorite bowl. These are subtle details showing friendship or deeper feelings that are also used to emphasize an insult, manipulate a political situation, or as a show of strength. All perfectly executed!

I am not going to go into the end, except to say that it was perfect for the trilogy and that Leckie took it to its logical conclusion. I loved this book, this trilogy as a whole! I know this is the end, yet, I hope that Leckie will write more in this brilliantly constructed world. Whatever happens, I will be re-reading the whole trilogy soon. Highly recommended.