TBR Review: The Brush of Black Wings (Master of Crows, #2) by Grace Draven

This is my first review for Wendy's TBR Challenge 2016 (hangs head in shame). But hello, here I am! Better late than never, right?

This eNovella has been in my TBR since 2015. This month's theme is Something Different -- whatever different may mean. I chose a fantasy romance novella with strong world-building, fantasy elements, and romance to please. I am loving most of Draven's fantasy romance books and thought I would share. 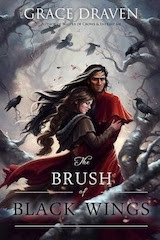 The Brush of Black Wings is the sequel to Master of Crows, one of Grace Draven's most popular fantasy romance books. It is not my favorite, though, that would be Radiance. Unfortunately, I did not review Master of Crows. I did leave the following short comment at Goodreads:


Dark fantasy romance. Slightly unbalanced in its execution with a few slow, and later sex filled sections; but overall, an above average fantasy romance with interesting main characters dwelling in a rich, dark, magical world.

Silhara of Neith, Master of Crows, and Martise of Asher are the protagonists of this series. The Brush of Black Wings begins with Martise going into the enchanted woods of Neith where she comes across the ruins of an ancient temple. She encounters and battles a dark entity, and escapes after regaining her magical powers. While Silhara wants to destroy the temple, Martise feels the need to identify the dark entity. The information she finds is horrifying -- filled with soul eating demon kings, necromancy, and dark magic. Unfortunately for Martise, the dark entity compels and takes her into another plane. As we already know, Silhara doesn't play nice. He will do whatever it takes to find Martise, including breaking the rules of magic, time, and world barriers.

A few comments here. First, the romance is good, it is there. Silhara and Martise are still as sexually compelling as they were in Master of Crows. The love and intimacy between the two are shown in spades. And that dark, rich, magical world is still at the center of the series. The plot itself, however, became problematic for me.

This novella is ultimately about Silhara and Martise, and their end of the story is well done. However, The Brush of Black Wings is not a stand alone. You see, this is a bridge story between the Master of Crows series and The Wraith Kings series. As a matter of fact, in my opinion, this novella is best understood and enjoyed if read after Eidolon (Wraith Kings #2). Why? The dark entity and the circumstances will actually make sense. But, warning, The Brush of Black Wings contains huge spoilers for Eidolon. Recommended to fans of both series.
Posted by Hilcia at 7:06 PM