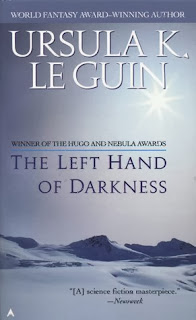 As mentioned in my previous post, most of the worlds explored by Ekumen are populated by descendants from Terra's (or Earth's) humans, however, in the Left Hand of Darkness the story takes place in the frozen planet Winter or Gethen where it is suspected that the population may have evolved as a result of experimentation conducted on the population when it was first colonized. This complex story begins as a report from Genly Ai, a Terran who as an Ekumen mobile becomes the first envoy to contact Gethenians in their frozen planet, and follows his journey to understanding a radically different people and world.

Genly Ai has resided in Karhide's capital City Erhenrang for two years. Attempting, without success, to accomplish his mission by convincing the king to willingly agree to trade or join Ekumen in their galactic civilization. His attempts to obtain an audience with the king, however, have failed. The powerful Therem Harth rem ir Estraven is his only ally and a man Genly doesn't like or trust. Unfortunately, Estraven falls out of favor with the king and after a rather cryptic conversation flees the city, leaving Genly Ai floundering with conflicted feelings of relief and betrayal.

Besides Winter's frigid weather, Genly Ai has one big problem. After two years, he cannot seem to get over the fact that Gethenians are neither male nor female. They are both, and as such, possess physical and personality traits found in both sexes. Intellectually he knows how it all works. Genly understands the customs and biology. He knows that sexual interaction takes place only during the lunar cycle, what Gethenians call kemmer, and that the rest of the month their sexual drive is dormant. He also knows that there is no separation of gender roles, but psychologically he hasn't been able to come to terms with the differences.


"Though I had been nearly two years in Winter I was still far from being able to see the people of the planet through their own eyes. I tried to, but my efforts took the form of self-consciously seeing a Gethenian first as a man, then as a woman, forcing him into those categories so irrelevant to his nature and so essential to my own."

It is this kind of binary thinking that makes it almost impossible for Genly to understand Gethenians as individuals, so he misunderstands or fails to grasp cultural, social and political cues that are key if he is to achieve his mission's goal. Incapable of understanding the local population, Genly feels deeply isolated.


"A friend. What is a friend, in a world where any friend may be a lover at a new phase of the moon? Not I, locked in my virility; no friend to Therem Harth, or any other of his race. Neither man nor woman, neither and both, cyclic, lunar, metamorphosing under the hand's touch, changelings in the human cradle, they were no flesh of mine, no friends; no love between us."

Genly leaves for other parts of the Gethenian world to try his luck with other governments and meets Estraven under different circumstances. The two embark on a danger-filled adventure through the frozen tundras of Winter, but personally I think of theirs as a journey toward understanding. The result is a science fiction piece where Le Guin brilliantly experiments by integrating gender roles with cultural and sociopolitical issues in detail, but at its core brilliantly explores the subject of duality. Finally, Le Guin's prose makes The Left Hand of Darkness a fluid, fantastic read that I won't soon forget.


"Light is the left hand of darkness
and darkness the right hand of light,
Two are one, life and death,
lying together like lovers in kemmer,
like hands joined together,
like the end and the way."

PERSONAL NOTE: I read this book back in November but decided to post my comments on the book during my participation in the Vintage Science Fiction Month and The 2014 Sci-Fi Experience. It was my first novel by Le Guin and it will not be my last. There are a few reasons behind that decision: one, her science fiction literary writing style is a plus for me. Two, I was surprised not only by the fact that she experimented with this subject matter back in the 1960's, but by the brilliant results. And, three: her exploration of gender roles, culture, sociopolitical issues, and inclusion of racial diversity in a science fiction setting and far away world are all part of what fascinated me about this book. It is what encouraged me to immediately look for the rest of her backlist, including some of her older novellas. Highly recommended.