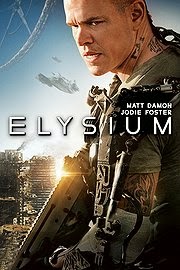 I love my sci-fi movies and Matt Damon is a favorite actor, so I looked forward to the release of Elysium on DVD during the holidays when I'm usually on vacation and can indulge myself in marathon movie watching at home.

The plot for Elysium falls under social science fiction with plenty of exciting action. It all comes down to a matter class, with the very wealthy living high above in the space station Elysium, and the rest of humanity surviving life on Earth. Most of the action takes place in a post-apocalyptic Earth decimated by pollutants and overpopulation. It's the year 2154 and Earth's inhabitants are wracked by decease, poverty, filth, and hopelessness. The population has few choices left. Some live and die working for the few Elysium owned mega-corporations where they are treated as nothing more than disposable cattle, others turn to crime for which they pay severe penalties, or in desperation, join rebel forces and attempt to gain citizenship in Elysium by breaking their immigration laws.

This life contrasts severely with the immaculate, rarefied, and sterile world that the wealthy enjoy in their space station with its controlled environment. Each luxury home has its own high-tech medical pod to take care of incurable deceases, and anti-immigration laws prevent undesirables from entering their airspace, so that the issues of overpopulation and poverty do not exist. It's all about control, and no one believes this more than Elysium's hard-liner Secretary Delacourt (Jodi Foster) whose actions reflect her beliefs, even as the moderate President disagrees with the results.

Max (Matt Damon) dreamed of going to Elysium as a child, but turned to crime in his youth and is now trying to lead a productive life by working in an Elysium-owned corporation. After suffering from a massive dose of radiation at work, he is given five days to live and is dismissed without a thought by the wealthy owner. Max realizes that his only chance at survival is going to Elysium for a cure and contacts rebel forces working to change the status quo. His journey is almost impossible, and throughout he encounters danger, his childhood friend Frey (Alice Braga) whose daughter is dying of Leukemia, and Delacourt's own private assassin on Earth.

I found the central sociopolitical plot points used in Elysium, overblown and without subtlety. Blomkamp's idea for a space station inhabited by the "haves" reminds me of isolated, and already existing, gated communities -- used as a base but expanded to build a dystopian future. The same goes with the reasons utilized for Earth's devastation and touchy sociological and political contemporary issues such as pollution, global overpopulation and the question of immigration laws, citizenship (I noticed everyone speaks Spanish including Max), and healthcare. The huge sense of entitlement v. poverty, or the "let them eat cake or die" attitude is blown out of proportion to fit the futuristic angle, but yes, the issues involved are immediately recognizable.

The action is exciting and entertaining, with science fiction details that range from the crude to the sophisticated to fit the plot, but there are places where plausibility, (in the plot), takes a backseat to the non-stop action. And as is expected with such actors as Matt Damon and Jodi Foster in the cast, the characterizations are above average, although I would not say outstanding or memorable. The rest of the acting was either average or over the top (that assassin!).

My husband and I watched this film together, and he had tons of questions about the plausibility of how the space station worked and the ships landed. We both ended up with questions at the end about plot holes or particular plot points that did not make sense. And, we had a long discussion about the sociopolitical aspects that were touched on in this movie. We both enjoyed the action and gritty dystopian atmosphere, and while I probably won't watch this movie again on purpose, I may get caught up on the action. I know my husband will watch it again. :)

Also on the holiday movie menu: 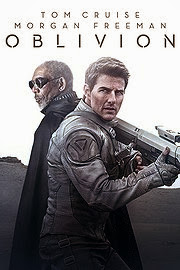 I'm not sure how to best summarize the plot for this movie without giving away too much or too little information. I will try my best though. Years ago Earth was invaded by aliens. Earth won, but the war left the planet uninhabitable with heavily polluted, radiation zones. Most humans have been evacuated to a colony in Titan. Supervised by Sally (Melissa Leo) from Control on the Tet (a sort of space station), Jack Harper (Tom Cruise) and Vicka (Andrea Riseborough) are two weeks from completing their mission as the mop up team on Earth overseeing the extraction of vital resources, such as water from the oceans, gathered by giant processors to be used at the Titan colony. Jack's work is to patrol the planet's surface from the skies and repair droids when needed, but when on the planet's surface, there's always the danger of attack from remaining alien scavengers. The situation changes drastically when a spacecraft crashes and Jack rescues Julia (Olga Kurylenko), the beautiful woman he has been seeing in recent dreams and impossible memories from before the war. As truths begin to surface, Jack and Vika's world unravels until the only answers left are too terrible to consider and the only choice left to all involved may be life or death.

Oblivion is beautifully shot science fiction film with a glossy, crisp, and clean post apocalyptic earth. It is a desolate landscape, but aesthetically pleasing with a black, white, and grey motif and few moments of vivid greens, bright blues, and later reds to shock the eye… I mean even the two main characters, Jack (Tom Cruise) and Vicka (Andrea Riseborough) are neutral in color -- wardrobe, makeup, hair, demeanor. There are also gorgeous still shots in this movie that can be used as magazine covers and/or saved for posterity as futuristic sci-fi art, or something along those lines.

The science fiction elements in this story are soft in nature, and although the storyline kept me engaged enough throughout, in the end I was underwhelmed with it as a whole. The movie begins with simple, contained scenes, and rather slow action, the plot builds as it moves along with revelation after revelation and multiple plot changes along the way. However, even as heavier action becomes part of the story, I found little tension in all that build-up. I watched this movie with my husband and brothers, and we all agree that if key plot changes are missed, nothing makes sense.

My favorite performance of this film has to be Andrea Riseborough's characterization of Vicka. I found it to be terrifyingly subtle. I love the way her character slowly falls apart so quietly, and how her eyes, body language, and tone of voice say it all without effort. The rest of the cast does their job as expected, nothing outstanding or out of the ordinary.

So, for me, Oblivion turned out to be a science fiction film with some messy plot changes, beautifully shot but predictable action scenes, and above average cinematography. My husband and brothers, on the other hand, loved the film as a whole! They were riveted throughout and say they will watch it again. So there you have it, two completely different reactions to the same film. One last comment, the title is perfect for the film.