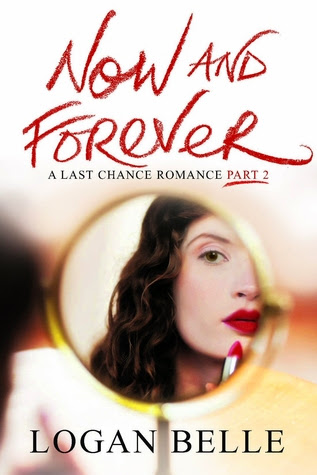 Now and Forever is the second part of Logan Belle's A Last Chance Romance two-part contemporary series. The conclusion to this series was a much anticipated book and worth the wait. In Now or Never, Part 1, Belle begins the process of weaving complex conflicts faced by her characters and introducing some fantastic heat and raw emotions. In Now and Forever, Belle hits her stride and delivers as she completes the characterization process and the full emotional punch of Claire's and Justin's story.

Whereas in Now or Never the focus was maintained on Claire, in Now and Forever that focus shifts to both characters, as Belle expands Claire's first point of view narration to include Justin's. This shift gives the reader the full scope of emotions needed to fully understand both characters. This is important because in this second installment Justin's background, motivations, and emotions are as fully explored as Claire's.

Claire's story begins in Now or Never when she is diagnosed with breast cancer and is told she has the BRCA gene. She makes the difficult but safe choice, which means a double mastectomy with reconstructive breast surgery and a hysterectomy to follow. She gets involved with younger, handsome Justin who becomes a friend and her wingman as Claire goes on to fulfill sexual fantasies in her "Now or Never" bucket list, going as far as ignoring reality and postponing the inevitable surgery. Claire is attracted to Justin even after he explains that he only ever has one-night stands. She gets her wish and looses her friend. Now and Forever begins exactly where Now or Never ends, with Justin walking away.

As we follow the story, Justin realizes that he can't let Claire's friendship go, furthermore he wants her badly and that one-night stand rule is not going to hold with her. He also misses his friend. It begins that way, but slowly, as the story moves along, he comes to some tough realizations about his feelings for Claire. Meanwhile, Claire has decided to stop running from reality and focuses on herself. She also realizes that although she has strong feelings for Justin, his tendency to run when things get tough doesn't make him trustworthy. Besides, she doesn't want him around when she goes through the pain or the changes that a mastectomy entails. Claire pushes Justin away.

If Justin ran away from a relationship at the beginning of their friendship, now Claire becomes the rabbit. She was game when it came to exploring sex, but love? No way. Her distrust of Justin and lack of belief in herself are monumental. Justin doesn't give up though. I loved him for that. For becoming Claire's friend and being there even when he wasn't there, and others, like her son Max and girlfriend Patti were allowed to take that place. Claire's young son Max who turns out to be a non-judgmental rock of understanding, and girlfriend Patti whose lack of understanding and judgmental ways are not as important to Claire as the fact that she's always there when needed.

I was enthralled by Claire's journey. She's a 40 something woman falling in love with a younger man just as she's going through what most women fear. Belle takes Claire, along with the reader, for a journey that begins with denial and ends with the healing process. Of course along with cancer and her growing love for Justin, Claire is also forced to face other problems in her life -- a dead-end job at a department store's make-up counter where younger women, but in particular a younger female manager first disregards and then steals her ideas and dismisses her experience, that empty nest her son Max used to fill, and facing herself in the mirror only to see a woman who let life and passion pass her by.

Belle tackles Claire's journey -- passion and lust, lack of confidence, feelings of inadequacy, pain and doubts, the healing process, and growth -- with a knowledgeable hand. Justin's journey to self-awareness, recognizing his weaknesses and Claire's strengths, leading to passion, love and true understanding of her, complete this story.

Now and Forever is a romance with some heated moments, a happy ending, and a subject matter pertinent to today's woman. Claire and Justin's journey are the icing and the cake. It resonated with me just as I am sure it will resonate with many others. I strongly recommend that both books be read to fully enjoy the experience. Highly recommended.