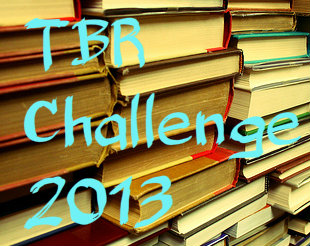 One of my favorite, as well as one of the most productive challenges around, is The TBR Challenge, hosted by Wendy from The Misadventures of Super Librarian.

In 2013, I read and reviewed some fabulous books and also ended up not finishing many others. But, the general idea is to either read or weed out those books that have been lingering in shelves or readers for too long, and in 2013 I read books from my TBR in spades! I also got rid of books that did not make the grade. Unfortunately, I did not (don't usually) blog about my DNF reads. One of my goals is to change that in 2014.

Below is a recap a of my TBR reviews:

January 2013 - Theme: Shorts
Within Reach by Sarah Mayberry: A-

February 2013 - Theme: Recommended Read
Psy/Cop Series by Jordan Castillo Price: B+
I did not read a romance. Instead I read an entire LGBT urban fantasy series and posted an overview of the 6 novels and 5 novellas.

March 2013 - Theme: Series Catch-up
Bone and Jewel Creatures by Elizabeth Bear: B+
I did not read a romance. Caught up on the Eternal Sky fantasy series (prequel novella)

April 2013 - Theme: New-to-Me Author
Here Comes the Bride by Pamela Morsi: B
Did not follow the theme and discarded book after book!

May 2013 - Theme: Author with more than one book in my TBR
Unexpected Family by Molly O'Keefe: B-

June 2013 - Theme: Lovely Rita
Unraveling the Past by Beth Andrews: B-
I did not read a Rita Award Winning book, instead I read a book by a Rita Award winning author.

July 2013 - Theme: A Classic, author, book, theme.
The Notorious Rake (Waite #3) by Mary Balogh: A-
I read three books for review this month including Years and Twice Loved by Lavyrle Spencer, and reviewed The Notorious Rake. This is the only book I officially reviewed for the TBR Challenge that made it to my 2013 favorite books list.

December 2013 - Theme: Holiday (any holiday)
All She Wants for Christmas (Kent Brothers #1) by Jaci Burton: B-
I read the entire Kent Brothers trilogy by Jaci Brothers, and planned on doing an overview of the contemporary series. But in the end, decided to just review the first book.

Did you notice that I did not post in August, September, October and November? During the second half of the year my schedule was off kilter and my posting days did not often coincide with the allotted review days, and in some instances I DNF the books I chose to read. But, I didn't stop reading books from my TBR pile during that time and ended up reviewing many of them after the deadline.

I consider The 2013 TBR Challenge a personal success. I discarded one box of print books and many more from my Kindle, and in the process found a few keepers.