The theme for this month's TBR Challenge is Series Catch-up. Recently, I found out that the novella Bone and Jewel Creatures by Elizabeth Bear, originally published in 2010, is connected to Bear's Eternal Sky fantasy world. However, I purchased this novella before I realized that connection, it has been in my TBR for a while. With the second full-length novel of the series Shattered Pillars releasing on March 19th (yesterday), I thought this month's TBR Challenge theme presented the perfect opportunity to read this piece. 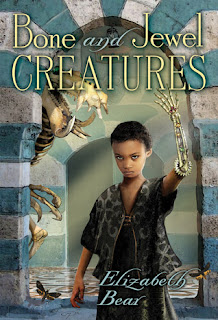 Dark magic is afoot in the City of Jackals...

Eighty years Bijou the Artificer has been a Wizard of Messaline, building her servants from precious scraps, living with the memory of a great love that betrayed her. She is ready to rest.

But now her former apprentice, Brazen the Enchanter, has brought her a speechless feral child poisoned by a sorcerous infection. Now, Messaline is swept by a mysterious plague. Now the seeping corpses of the dead stalk the streets.

Now, finally, Bijou's old nemesis--Bijou's old love--Kaulas the Necromancer is unleashing a reeking half-death on Bijou's people. And only Bijou and her creatures wrought of bone and jewels can save the City of Jackals from his final revenge.

It is often the case with Elizabeth Bear's books that the covers don’t do justice to the fantasy she conjures in her stories, or to my imagination for that matter -- the exceptions are the two Eternal Sky novels. That is the case with Bone and Jewel Creatures, having said that, the summary is quite accurate. After having read so many of Bear's works I'm fairly familiar with her style, so why did it still surprise me that at the end, this 133-page fantasy novella felt as if I read a full-length story with all the bells and whistles, or in this case, all the necessary jewels and bones?

Messaline, the City of Jackals, is a far away place that lies southwest of the Land of Eternal Skies and just south of the Uthman Caliphate on the map provided at the beginning of Range of Ghosts. It is a city where the Old Bey rules and Brazen the Enchanter flourishes while both Bijou the Artificer and Kaulas the Necromancer decline. The decline of Bijou and Kaulas are at the heart of this piece as is the feral child with a poisonous wound that Brazen brings to Bijou's door to save or die.

Bijou saves the seemingly mute, feral child she names Emeraud, but soon finds herself inundated by walking corpses and infected animals poisoned in the same manner. It quickly becomes obvious that Kaulas the Necromancer, Bijou's old love, is the culprit. A wizard's war is at hand, but can Bijou and her Artifices made out of bone and jewels hold out against the stench of death that fills the City of Jackals?

This is such a well-written novella. Bear's gorgeous prose combined with the excellent magical atmosphere, fantastic characters, and some rather gruesome moments made this novella memorable for me. Bijou's Artifice creations are colorful and intricate, and I love the contrast between the world that exists inside Bijou's isolated little shop and Bear's descriptions of Messaline. The story is told from three points of view, that of Bijou, Brazen, and Emeraud. The shifts flow well, and as a result the characters become alive to the reader – particularly Bijou and Emeraud. I actually got lost in the magic and atmosphere of this place and these characters.

As to how this story relates to the Eternal Sky series, so far the only real connections I found between them is that Messaline is in the map mentioned above, making the City of Jackals a part of this world and the necromancy that ties in to the legend of the Carrion King. Hopefully the culture and its inhabitants (I'm thinking Emeraud) will play a role in future tales.

Bone and Jewel Creatures is what I hope to find when picking up a novella. The prose, world-building, atmosphere and characterization are excellent. The plot is good enough to keep me turning those pages until the very end and leaves me satisfied, but wishing that there's a follow-up book somewhere that will transport me to the same magical place again. Recommended.

ETA: Bone and Jewel Creatures can be read on its own or as part of the series. Having read Range of Ghosts a year ago, I'm sure that I missed some obvious connections to the Eternal Sky series, but hope to find more after reading Shattered Pillars.
Posted by Hilcia at 10:15 AM