The Queen, The Cambion, and Seven Others by Richard Bowes 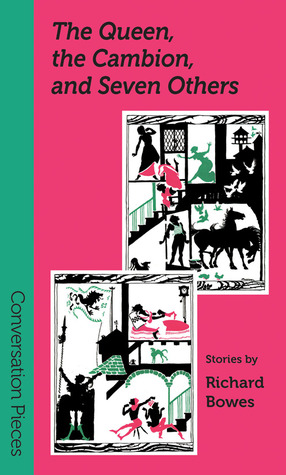 Myth is the sea on which the Fantasy story floats.
Legend is the wind that drives it.
Its place of birth is the Fairy Tale.

So begins The Queen, The Cambion, and Seven Others by Richard Bowes, a beautifully illustrated little book containing eight stories ranging from modern fairy tales and fantasy, to variations on myth and legends. The afterword by Mr. Bowes, "A Secret History of Small Books," enhances the overall reading experience.

I read this magical little book and enjoyed all of Mr. Bowes' stories. Of course I have a few favorites, including "The Queen and the Cambion" in which Bowes takes events from the life of a historical figure, Queen Victoria of England, and incorporates a character from Arturian legend to create a magical modern fantasy tale. There is "The Lady of Wands" a magical fantasy with a fantastic narrator as the central character, and a whodunit with twists, turns and political undercurrents that can only take place when a story is set in the land of fairies. And the fantastic "The Progress of Solstice and Chance" with its soap opera style plot where the King of Winter and Queen of Summer marry and their child Solstice falls in love with Chance. I recommend all the stories, but today I'm going to focus my post on one story, a single Fairy Tale.

The book begins with "Seven Smiles and Six Frowns" a fairy tale. It goes something like this. On a summer's evening the Witch of the Forest of Avalon gathers the children on her porch to tell them a simple tale about Prince Alaric who is beloved and gifted by his father the King and the Fairies with all types of magical presents. When the time comes for Alaric to marry, he is not satisfied with the princesses presented to him, but while traveling through the forest, a beautiful maiden uses cunning and magic to divest him of the magical items that make Alaric special until all he has left to win her is himself. There is a happy ending of course, but, what happens after that is what makes this a striking and unique piece.

Bowes' simple fairy tale gains complexity as the Witch invites her future apprentice to return the next day, alone, so she can tell her a different version of the fairy tale, one that is based on 'truthful' events. After the apprentice becomes the Witch, she in turn makes further revelations to her own apprentice and the reader. By the end, what began as a simple Fairy Tale with a handsome Prince and a happy ever after evolves into "a tale that not only entertains but teaches." Bowes' "Seven Smiles and Six Frowns" is an excellent example of the evolution of a fairy tale where modern insights are used by the narrator to enhance the listener's understanding but retaining the magic remains essential to complete the experience.


The collection includes “Seven Smiles and Six Frowns” a story of the evolution of a Fairy Tale; “The Cinnamon Cavalier,” a Fairy Tale variation a critic has called, “The Gingerbread Man, writ large,” and “The Margay’s Children” a modern take on a “Beastly Bridegroom” tale; “The Progress of Solstice and Chance,” with its complex sexual relations and invented pantheon of gods, the outrageous situation and characters of “The Bear Dresser’s Secret,” and the “The Lady of Wands,” set in a fairy/mortal demi-monde; and two Arthurian tales, “Sir Morgravain Speaks of Night Dragons and Other Things” and “The Queen and the Cambion” in which the eponymous queen, though famous, is not Guinevere.