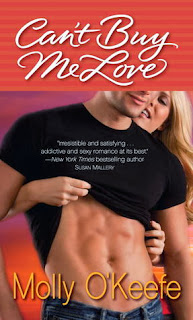 I've read and really enjoyed Molly O'Keefe's category romances, but none of her full-length contemporary novels. I've had Can't Buy Me Love and Can't Hurry Love in my TBR pile for a long while and decided it was time to give them a try, particularly since I'm interested in reading her 2014 future release Never Been Kissed.
----------

I like Tara Jean. How could I not? She's been through hell in her life and is doing whatever is necessary to survive. After having come clean with old man Lyle Baker about her past, Tara agrees to go along with a fake engagement to the 89 year old man just so he can bring his children home before he dies. But, Tara Jean has some major unresolved issues and seems to have multiple personalities: one minute she's a sex bomb, the other she's a smart woman with insight into other people's pain, and the next she's a 'mean as a skunk' survivor, refusing to turn into a pile of goo or a vulnerable flower. And, the reader never knows which Tara Jean is going to come out and play at any given point.

Luc Baker may be an aging, injured hokey player, but please don't get him confused with the type you'll find in other sports romances. It's true that he's steaming hot! Hockey is his world, and he has a lot of unresolved anger. But Luc is a good, honest man, with the patience of Job, who cares about his family and will do anything for them -- sister Victoria, mother Celeste, and nephew Jacob -- and that includes going back to Crooked Creek Ranch to stop his abusive father from marrying Bimbo Barbie because his sister Victoria insists that she needs her portion of the inheritance to survive.

Luc plays the asshat for about a minute, but it doesn't take him long to see past Tara Jean's Bimbo Barbie masquerade, and he likes what he sees. So does Tara Jean. They both have issues, but hers become the problem. He harbors unresolved anger toward his abusive father and is fighting for his career, but he's also honest, sweet and more than understanding. She's scared, confused, dishonest, and allows her dysfunctional past to interfere in her new life, but is also insightful and gives Luc and others the support they need when needed. And don't get me wrong, as a couple, Luc and Tara Jean share some scorching chemistry and emotionally charged moments. O'Keefe throws in a sex scene in the backseat of a car that is smoking!!

Secondary characters are a mixed crew -- some are likable and others not so much -- with their futures left hanging at the end of Can't Buy Me Love. Victoria, Luc's sister, plays the type of woman who has been so damaged by her father's abuse that she has zero self-confidence and less than zero judgment. She has always relied on others to look after her -- her brother, the wealthy dead husband who left her with a mountain of debt -- and hopes her father's money or a future husband will continue to do the job. Victoria plays the angry, pathetic figure in this story, with plenty of room for growth. On the other hand, Luc's mother Celeste, a wealthy ex-model, is cool with more insight and empathy than expected. Eli, the ranch foreman, plays the angry man who feels cheated by the Bakers and shows some redeeming qualities that give me hope for his future.

External conflicts involving Tara Jean and her past provide some rather over-the-top climactic scenes and are used as a device to resolve some of her issues, and in turn Luc's. I love Luc's character in this romance and the way O'Keefe portrays an aging athlete without making him a total idiot, even as occasionally he plays the asshat. But after all is said and done, Tara Jean is one of those female protagonists who feels undeserving of love, and although as readers we share her magnificent struggle, we never witness what exactly made Tara Jean turnaround and believe. Too many unresolved doubts, and as a read, a mixed bag for me.