For my first post as part of the TBR Challenge 2014, I have chosen a book that fits the theme: short stories, novellas, category romance. I received One White Rose by Julie Garwood, along with the rest of The Clayborne Brides trilogy, over three years ago from Mariana, as part of our New Jersey Blogger's book swap in 2010. 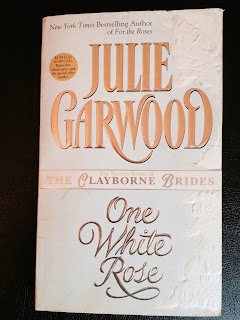 From the prologue:
"Long ago there lived a remarkable family. They were the Clayborne brothers, and they were held together by bonds far stronger than blood.

They met when they were boys living on the streets in New York City. Runaway slave Adam, pickpocket Douglas, gunslinger Cole, and con man Travis survived by protecting one another from the older gangs roaming the city. When they found an abandoned baby girl in their alley, they vowed to make a better life for her and headed west. They eventually settled on a piece of land they named Rosehill, deep in the heart of Montana Territory."

One White Rose is the second novel of "The Clayborne Brides" trilogy, part of the Rosehill series than began with Julie Garwood's novel For the Roses. In this 150 page book, Douglas Clayborne finds happiness, but not before he encounters danger and lots of frustration.

Douglas goes to meet a man about a horse and instead finds his widow Isabel Grant at the other end of a shotgun believing that he is a hired goon sent by the wealthy man who killed her husband and keeping her from going into town. But there's more to the situation, Isabel is going into labor, and Douglas has to take charge of that situation immediately. However, soon he realizes that Isabel's isolation has placed her and now her baby in real danger. Douglas can't easily convince Isabel to leave and after she steals his heart, there is no way he will leave her behind.

This is a short and to the point western historical romance. Garwood eliminates all the extraneous scenes, places Douglas and Isabel in a cabin for about ten weeks with very little physical influence from secondary characters and lets the romance take off. Friendly intimacy is quickly established, which makes sense because of their first encounter, the birth. However, the rest takes longer as Garwood uses daily contact to build up sexual tension between the characters. For Douglas, protective, tender feelings for both Isabel and her baby slowly turn to a frustrated possessive love. Isabel takes longer to realize what is happening and seems to be confused about her longing, and frustrated bickering soon replaces all the friendly banter.

I enjoyed this quick romance. Released in 1997, it's now considered "old school," and yes it does have that feel with the over-protective hero and the damsel in distress. But, I must say that once Isabel has that baby, she is a strong-minded woman who knows what she wants and is not easily manipulated, and Douglas, a tender man, is in no way an overly alpha hero. On the contrary, he is a too honorable and honest man and of course, in the end that's where the real conflict lies between this couple.

The rest of the story is kept off the pages until almost the very end, with an interlude here and there maintaining tension and anxiety about upcoming danger alive for the reader. Fans of the series will enjoy appearances by all the Clayborne brothers. Ultimately, not overly sweet with tender moments and more sexual tension than bedroom scenes, this western historical romance was a tasty little morsel.