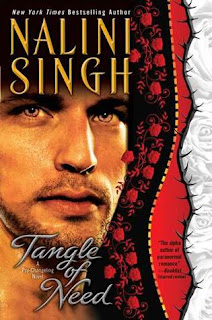 Adria, wolf changeling and resilient soldier, has made a break with the past--one as unpredictable in love as it was in war. Now comes a new territory, and a devastating new complication: Riaz, a SnowDancer lieutenant already sworn to a desperate woman who belongs to another.

For Riaz, the primal attraction he feels for Adria is a staggering betrayal. For Adria, his dangerous lone-wolf appeal is beyond sexual. It consumes her. It terrifies her. It threatens to undermine everything she has built of her new life. But fighting their wild compulsion toward one another proves a losing battle.

Their coming together is an inferno...and a melding of two wounded souls who promise each other no commitment, no ties, no bonds. Only pleasure. Too late, they realize that they have more to lose than they ever imagined. Drawn into a cataclysmic Psy war that may alter the fate of the world itself, they must make a decision that might just break them both.

Tangle of Need by Nalini Singh is the eleventh book of the Psy/Changling series. In this installment Ms. Singh includes the expected romance, tightens up her world building, and begins the slow process of closing open threads in preparation for the end of the series.

Riaz found his mate in a married human woman who can never belong to him because she is deeply in love with her husband. For a wolf who is supposed to mate for life, this is a soul-breaking experience and he returns to the pack hoping the warmth of the den will help him heal, even if no one knows his truth or agony. Although Riaz is a lone wolf and needs touch to survive, he cannot abide to be touched by females other than his intended mate, until he touches Adria and passion consumes him.

Adria can't even smell Riaz's scent without wanting him. After a long-term relationship with a non-dominant wolf for whom she subsumed her dominant side, an experience that almost broke her, she is not ready to give of herself again. Particularly to a dominant male who seems to dislike her even as he wants her. But Riaz and Adria desire each other too much and give in to a burning passion that quickly turns into deep friendship, seductive play and finally a soul searing love. As Riaz relentlessly fights for his soul and a future by trying to make Adria his own, for Adria it is torture knowing that Riaz can never be truly hers.

Initially, I was not invested in Riaz and Adria's romance. I think this has something to do with the fact that the focus was not entirely on them throughout the beginning of the story. However as the story moved along, I became involved with both characters and hoped that they would find a good resolution to their angsty, passionate relationship.

This romance goes against everything that has been established as to the changelings' mating culture: deep abiding love vs. the changeling's mating bond. Changelings mating for life has been the mantra so far, and once that mate is found, they can't have another. Nalini challenges her own world building by introducing the possibility that the love felt by the human side of a changeling can somehow be accepted by the changeling's animal side. She makes it work.

There are many secondary characters from the SnowDancer pack alone vying for attention and taking the focus away from the main romance in this installment. Hawke and Sienna take a lot of page time (not that I don't love them), with some of their appearances key to the story while others seem extraneous or unnecessary. They even have their own mating ceremony! Riley and Mercy also have a very special moment in this story, and there were appearances by other secondary characters. For a while there it seemed to me as if everyone who had a romance would make an appearance and take the focus away from Adria and Riaz.

Besides the romance, many events are happening at once and we see the beginning of what will ultimately be the Psy civil war. SnowDancer is in the center of the it all as they make new alliances with other changelings, and strengthen their bonds with the Human Alliance, the Psy, and old friends.

The Pure Psy organization is still limping along and causing problems, and the cracks and corruption in the PsyNet are growing. Political jockeying within the Psy is as deadly as ever, and although there are no huge battles, there are some great discoveries here. The Arrows' agenda is highlighted through Vasic and Aden's characters. Kaleb is very much in the forefront in this installment and by the end of the book turns out to be more fascinating and intriguing than ever. It seems as if he's ready to finally come out and play. Bowen of the Human Alliance plays a small key role, and both Nikita and Anthony make interesting and history-making choices.

Tangle of Need has the overall feel of a transitional book in this series -- the calm after the battle and before the war. For a change, there are some beautiful, playful, and tranquil moments to enjoy in this romance. I'm fascinated how, even when the romance is not a favorite for me personally, Singh continually manages to keep me on tether hooks waiting for the next book in this long series. Her world building has not faltered throughout, and I love the way Singh challenges her own world building with authority and makes it work. As she begins to close threads, for readers, it will become a matter of paying close attention to detail. I have a feeling we are all in for some great surprises!

My reviews of Psy/Changeling series:
Mine to Possess, Book 4
Branded by Fire, Book 6
Bonds of Justice, Book 8
Kiss of Snow, Book 10