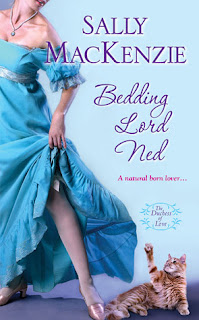 Determined to find a husband, Miss Eleanor "Nell" Bowman attends a ball put on by the Duchess of Greycliffe, fondly referred to as the Duchess of Love. But she roundly dismisses the suitors the matchmaking hostess has invited on her behalf. For it’s the duchess’s dashing son Ned, Lord Edward, who long ago captured Nell’s heart—and roused her desire. All it takes is a pair of conveniently misplaced silky red bloomers to set the handsome widower’s gaze on this unusual girl who is clearly more than meets the eye…

After more than a year of mourning, Ned longs to finally start anew. At first glance, the birthday ball his mother has thrown in his honor is decidedly lacking in suitable mistresses. But he senses something unexpectedly alluring beneath the veil of Nell’s plain exterior— something she’s anxious to reveal, and the lonely Lord is incapable of denying...

Nell's secret crush on Ned has lasted a lifetime, literally, but Ned chose to marry her best friend instead. He has been a widower for three years and Nell has been turning away all suitors in hopes that someday Ned will turn to her and see her as a woman and not a friend, with no results. During this year's birthday ball she's determined to let him go and allows the Duchess' help to find another.

Ned grieved for his dead wife for three years and is not interested in his mother's matchmaking efforts. However when he arrives at his mother's country estate for the birthday party and retires to his room only to find a woman, rump in the air, digging under his bed, unbelievably his body comes back to life. Except that the woman turns out to be 'good old Nell.' Ned then decides that maybe it is time to look for a wife to fill his nursery and agrees to his mother's matchmaking plans, and those plans don't include Nell.

Bedding Lord Ned by Sally MacKenzie was fun, funny and sweet. Ned needed a few fights, a thieving cat, a shot of brandy to the face, a whole household, plus I believe a few shots to the head to see what was in front of his face. Nell should have used the red silk drawers earlier and more fun would've been had all around!

The cat was priceless, the red silk drawers excellent bait, and the Duchess of Love and her Greycliffe stole more than a few pages in bedroom scenes, while Ned thoughtlessly bumbled his way around and Nell worked up the nerve to fight for her man. The secondary characters helped to establish the fun atmosphere and Ned's brothers were wonderful. Ash's story about a failed marriage that lasted only one night promises to be a good one, and Jack! Now there's a fun young man with a bit of insight about females. These two brothers stole the spotlight and I look forward to reading their stories.