Review: Point of Knives: A Novella of Astreiant by Melissa Scott 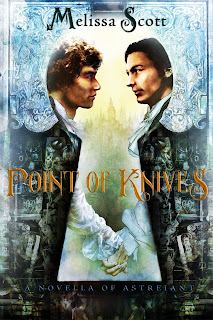 Set in an alternate pseudo-Renaissance world full of magics, pointsmen, wizards, necromancers and deadly political games, Point of Knives by Melissa Scott is a brand new novella that links the classic original fantasy Astreiant duology -- Point of Hopes and Point of Dreams -- by closing the gaps between the two books.

In Point of Knives, Scott's main characters Adjunct Point Nicolas Rathe and ex-soldier Philip Eslingen, now Caiazzo's knife or bodyguard, are thrown together again by unusual circumstances surrounding the double murders of father and son Grandad Steen and Old Steen, both rumored to have been pirates.

Circumstances are further complicated when Old Steen's son, Young Steen, claims his personal effects and an until-then-unknown wife shows up making the same claim. Seeking compensation for moneys owed, Caiazzo also lays claim to the man's possessions and dispatches Eslingen to represent his interests and to help Rathe with the investigation.

Nico and Philip can't help but be glad to be close again after last summer's affair, and although they know that neither can afford too close a relationship, both hope that the circumstances don't affect their friendship or their feelings for each other. Rathe is known for his excellent insight and trusts Philip even as he knows that as Caiazzo's knife, thug or blade for hire, Philip owes him loyalty. However, his feelings are deeply involved.


[...] he would only sound besotted. And I'm not, he thought. Not besotted. Fond of him, friendly with him --- gods, it was easy to slip into the habit of the summer, too easy to treat him as comrade and friend --- and if he was honest with himself, yes, he could become besotted. Could even --- He refused to utter the betraying verb, even in his own mind.

Nico and Philip agree that during the investigation they will take advantage of their time together as winter-lovers with a promise not to ask more from each other when that time ends. But will they? The murder investigation takes them from Point of Hopes' narrow streets into the dangerous neighborhood that is Point of Knives, and slowly becomes a coil that involves a deadly political game, gold, magists, alchemists, necromancers, and that when unraveled might prove deadly to Nico and Philip.

Point of Knives picks up on events a few months right after Point of Hopes ends and expands on the already established relationship between Nico and Philip. I was taken with the complexity of the world building in this fantasy, as well as with the excellent characterization. The police-procedural aspect of the novel is intricate and complete, with a gruesome beginning, excellent investigative work and a surprising, satisfying resolution. More importantly, it is through this key aspect of the story that Scott cleverly incorporates fantasy, adds details to her world, and develops a lovely romance.

The characters that populate this fantasy are regular folk that somehow stand out in this world where magics and alternate history intertwine so seamlessly and are so well crafted, that after a while all of it seems possible.

Points of Knives is a gorgeous addition to the Astreiant series. Melissa Scott takes this fantasy, fills it with memorable characters, and gives the reader more by incorporating a fully developed romance and a police procedural with enough twists and turns to satisfy the most finicky of readers. Highly recommended.