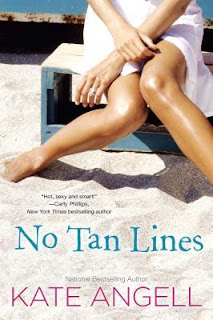 There's a place where the ocean meets the shore, where kicking off your shoes and baring some skin is as natural as sneaking under the boardwalk for an ice cream cone and stolen kisses. But life isn't all a beach for Shaye Cates, even if her idea of an office is a shady umbrella at the water's edge equipped with cell phone and laptop. Steely-eyed Trace Saunders is the incredibly irksome fly in her coconut tanning oil. And running a kids' softball team with her long-time rival is going to have everyone in her little Florida town buzzing. Her scads of laid-back relatives and his whole uptight clan know that Shaye just wants to play ball while Trace thinks only of business. But beneath the twinkling lights of the ferris wheel, the magic of sea and sand can sweep away every inhibition...Suddenly, it's summertime, and the lovin' is easy.

No Tan Lines by Kate Angell (or Barefoot on the Boardwalk as I tend to think of this story) is a quick, light read. It's a good summer or beach read... I mean it has the sand and waves, the boardwalk, the fair, and most importantly, the romance.

The story began with lots of potential and a great background story. The Saunders and the Cateses are two families who have been feuding for 100 years. Barefoot William was once a united beach town in Florida, but became divided into Barefoot William and Saunders Shore by Central Street and bitter enmity when Evan Saunders moved to town with his capitalist ideas. One side became a high end resort beach town, while the other remained family and tourist oriented, offering a boardwalk full of fair grounds, fun shops, and casual dining where residents and tourists can just have fun and well... walk barefoot. This casual approach to life vs. the more formal high end style is what keeps the two sides of the town apart for 100 years. And of course it's also what makes Shaye Cates and Trace Saunders bitter enemies throughout their lives. After all, it's tradition!

We first meet Trace at sixteen when he walks into a candy store located at Barefoot William, where Shaye and her cousin Kai are working the counter. There's a great confrontation between the two where in the end Shaye comes out the winner -- I loved that scene. Years later, Shaye represents the interests of the Cates' family businesses on the Barefoot Williams boardwalk, and Trace runs the Saunders' businesses on the Saunders Shore side of town. When both towns need to negotiate rights to the beach for a volleyball tournament, Shaye and Trace must meet face to face and the real fun begins.

There's a sense that these two would do anything to get the upper hand on the other, no matter what! The problem? The more they keep an eye on each other for sneaky attacks, the more the attraction grows between them as they share walks on the beach, ferris wheel rides, lunch meetings and more. But breaking with 100 years of hostile tradition won't be easy.

I really enjoyed the overall atmosphere in this story. The beach town with the boardwalk, the beach, the rides, the waves and sand made me feel as if I were there at Barefoot William. I wanted to walk on that boardwalk and enjoy an ice cream cone. The Cates clan gave the story a family atmosphere, and the hostility between Shaye and Trace, their competitiveness, and initial shenanigans were fun.

I think for me the romance between Shaye and Trace worked up to a certain point. I could feel their attraction and knew that, at least Trace, was ready to forgive and forget. I wasn't too sure that Shaye was really ready to meet Trace in the middle, and frankly their give and take was more enjoyable for me than their actual sexual encounters once the affair between them began in earnest.

This story, however, has multiple points of view and two other romances that are inserted in the middle of Shaye and Trace's, so that the focus of the story is constantly shifting. This became a distraction and pulled my interest away from the main couple. The timeline became a problem at one point, particularly toward the end when a new couple, Sophie and Dune, were introduced and the focus remained on them for quite a long time. This was an enjoyable story line, but one that definitely detracted from the main romance.

Overall, No Tan Lines is a contemporary romance that began with lots of potential, but that somewhere along the line lost its focus and ended up as an average read for me. I still enjoyed some aspects of the story, and think that this is a book that can be enjoyed as a light beach, or summer read. By the way, Dune and Sophie? They make an excellent couple and stole the show, and I'm hoping that there's a book in the near future about those two. I'll read it!