Today is a great day for new releases! I have them all nice and cozy in my Kindle already. :)

However, there were a couple of June releases that I missed! Books that I'm really excited about reading, because they are written by a writer who make it to the top of my favorite list last year. So in a way, this is an author highlight and a new release post since two of the books I'm highlighting are by the same author, Mr. Elliott Mackle. The rest of the books are July 2012 releases that I will definitely read. 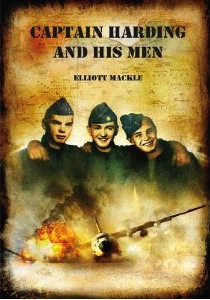 
When a C-130 bound for Southeast Asia explodes on takeoff at remote Wheelus Air Base, Libya, handsome, hard-charging Captain Joe Harding instinctively realizes that the cargo list--''medical supplies and radio tubes''--was faked. When Joe's newly-married workout buddy does a swan dive off a fifth story balcony in downtown Tripoli, Joe refuses to accept the semi-official verdict: suicidal depression. And when Joe's tennis partner, the son of the American ambassador, decides to celebrate his eighteenth birthday by appearing unannounced at Joe's BOQ door, the potential difficulties of their love-match must be addressed--seriously and without delay.

Continuing the adventures and misadventures begun in Elliott Mackle's award-winning Captain Harding's Six-Day War, Joe and his fellow officers and airmen contend with a highly decorated but sexually abusive wing commander (who happens to be Joe's boss), a closeted Pentagon official fighting to save his career, a CIA agent who may be an impostor, and shipments of British weapons that fall into the hands of anti-royalist rebels. When a kidnapping goes terribly wrong, Joe must fight for everything he holds dear: duty, honor, country and love.

Captain Harding and His Men was actually slated to release in August, but released early in June. I noticed almost immediately because I bookmarked this book at amazon! I've been hunting this story down (checking up on it) ever since I read and loved the first installment, Captain Harding's Six Day War last year, and by June 5th this novel was in my Kindle. For those of you who also enjoyed the first book (or who want to give this series a shot), check it out... it's out already! 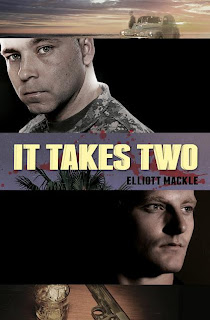 
February, 1949. Fort Myers, Florida. It started out to be such a nice day. But early morning gunfire at the Royal Plaza Motor Hotel changed all that. One white man is dead. One black man is dead. The white man's widow has just crashed the investigation and is waving a gun around. Dan Ewing, who isn't supposed to be there, barely escapes getting shot. Saving his bacon is Lee County detective Bud Wright. Dan and Bud are more than just fishing buddies. But that's one secret of many in this small town.

Dan is the manager of the Caloosa Hotel, a class act if you're just passing through, but a provider of card games, call girls, mixed drinks and other special ''services'' for members of the ultra-private Caloosa Club. This doesn't sit well with everyone in town, including a wealthy car dealer, the KKK, and Bud Wright, despite the fact that he's sleeping with Dan. But the car dealer is the dead white man, the black man is the husband of his wife's former maid, and the sheriff, Bud's boss, seems determined to steer the investigation off track. So what does the apparent murder-suicide have to do with the Caloosa?

Former journalist Elliott Mackle takes this wonderfully realized ''why-done-it'' to fascinating levels as he explores the various factions of a small southern town facing the giant implications of a rapidly changing society in the postwar years. It Takes Two, Mackle's first novel and a Lambda Literary Award finalist returns to print.

Also out in June from Mr. Mackle, his first novel It Takes Two. This book was out of print and was re-released in both print and ebook formats by Lethe Press. I looked and searched for this book last year and could not get my hands on it. I wanted to read it right away after finishing Captain Harding's Six Day War, and that was frustrating. Sooo, for me that was great news! It Takes Two was a Lambda Literary Award finalist and of course it had some excellent reviews when it was first released. I received this book for review from the author, and of course you know that yes... I already read it! If you have NOT read this excellent novel yet, check it out it's available again. Review to come! 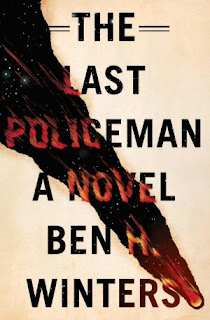 
What’s the point in solving murders if we’re all going to die soon, anyway?

Detective Hank Palace has faced this question ever since asteroid 2011GV1 hovered into view. There’s no chance left. No hope. Just six precious months until impact.

The Last Policeman presents a fascinating portrait of a pre-apocalyptic United States. The economy spirals downward while crops rot in the fields. Churches and synagogues are packed. People all over the world are walking off the job—but not Hank Palace. He’s investigating a death by hanging in a city that sees a dozen suicides every week—except this one feels suspicious, and Palace is the only cop who cares.

The first in a trilogy, The Last Policeman offers a mystery set on the brink of an apocalypse. As Palace’s investigation plays out under the shadow of 2011GV1, we’re confronted by hard questions way beyond “whodunit.” What basis does civilization rest upon? What is life worth? What would any of us do, what would we really do, if our days were numbered?

The Last Policeman is another novel that I accepted for review. Now... how could I pass it up? It's the first book in a pre-apocalyptic "whodunit" trilogy, with a pretty odd sounding central character. The blurb for this book definitely grabbed my attention. I haven't read anything by this author, although I think most of us will recognize a couple of his previous titles, namely Sense and Sensibility and Seamonsters and the bestseller Bedbugs. 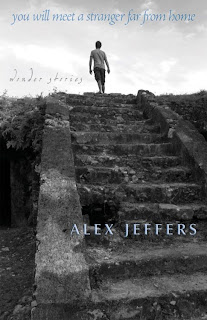 You Will Meet A Stranger Far From Home: Wonder Stories by Alex Jeffers
Release Date: July 14, 2012


Ten recent stories that wander back and forth along and across the boundaries between realistic, fantastical, and science fiction.

This is the only description I could find for Mr. Jeffers' latest collection, You Will Meet A Stranger Far From Home: Wonder Stories, except for a list of titles a small summary about each story at the author's site, plus a few advance reviews... some very good ones! You can read titles and descriptions here. I've read two of those stories already (in different anthologies) and loved them.

It's no secret that Jeffers is a favorite author, his book The Abode of Bliss: Ten Stories for Adam was a favorite last year, so I'm not missing this collection. 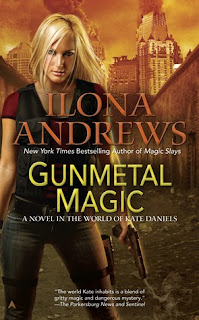 
After being kicked out of the Order of the Knights of Merciful Aid, Andrea’s whole existence is in shambles. She tries to put herself back together by working for Cutting Edge, a small investigative firm owned by her best friend. When several shapeshifters working for Raphael Medrano—the male alpha of the Clan Bouda, and Andrea’s former lover—die unexpectedly at a dig site, Andrea is assigned to investigate. Now she must work with Raphael as her search for the killer leads into the secret underbelly of supernatural Atlanta. And dealing with her feelings for him might have to take a back seat to saving the world…

Gunmetal Magic is Andrea's book! From the Kate Daniel's series by Ilona Andrews! Am I going to miss it? Heck no!! She's one of my favorite characters from this series, and I can't wait to read this book to see how the Andrews team develop Andrea into a central character. Andrea and Raphael... Hah! Yeah!

There are only three July releases in this early release post. I will post more later! Are there any books you are looking forward to reading in July?
Posted by Hilcia at 5:43 PM