Review: A Night Like This (Smythe-Smith #2) by Julia Quinn 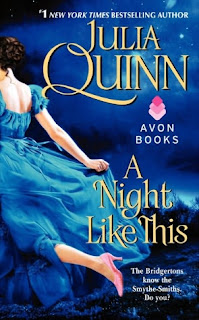 Julia Quinn has the touch when it comes to penning light, amusing historical romances. A Night Like This, the second book of the Quinn's Smythe-Smith quartet, is just such a romance.

The Smythe-Smith women are excellent fodder for comedy with their infamous musicales and the fact that they are oblivious when it comes to their lack of musical talent, but as we found out in Just Like Heaven, they are also loyal, determined, warm and rather insightful when it matters. The male Smythe-Smiths seem to possess similar characteristics.

Daniel Smythe-Smith, the Earl of Winstead has been through a tough three years running around Europe and dodging Ramsgate's killers, but now he's back in England and so happy to be back home that he even appreciates the cacophony of what passes as his cousins' music at the annual Smythe-Smith musicale. The young earl, however, is stunned by the beauty of the young woman murdering the piano keys. Thankfully, she's not a cousin, but he will find out who this beautiful woman who stopped his heart and knocked out his breath is, and follows as she runs off after the musicale ends.

Anne Wynter is hiding from a dangerous someone in her past, and her hiding place is as governess to the Pleinsworth family's young daughters, the Smythe-Smith cousins, Harriet, Elizabeth and Frances. Anne is asked to replace the eldest Pleinsworth sister Sarah on the night of the infamous Smythe-Smith musicale, and as fate would have it she meets Daniel Smythe-Smith, gets kissed and falls just a tiny bit in love with the charming young earl, whom she knows can never be hers.

Daniel is relentless in his pursuit of Anne. He blackmails Sarah and manipulates his aunt and family so he can spend time with her at his country estate. There, Daniel and Anne spend some of the most beautiful and fun days of their lives together, as they entertain the young Smythe-Smith cousins, spar, kiss, and quickly fall for each other. But Anne knows that her secret past and current position as a governess won’t allow her dream of a relationship between them to become a possibility. A dangerous carriage accident that leaves Anne hurt and Daniel thinking that Ramsgate is again making an attempt on his life, quickly brings this interlude to an end and reality to the forefront.

A Night Like This was such a lovely read, there's no other way to describe it. Daniel is one of those joyful, charming characters, that's tough to dislike, no matter his foibles. I absolutely understood why Anne fell in love with this man. There are fun and romantic moments galore in this book. Yes, lots of amusing moments to lighten up your day. Anne is just as likable. She keeps her secrets well and although she falls hard for Daniel and is truthful about her feelings for him, she also keeps her head and uses common sense. Good for Anne.

I loved the secondary characters in this novel. The Smythe-Smith cousins, Harriet, Elizabeth and Frances provided lots of the confusing-like dialog that made this novel so amusing and also gave it a bit of a young, refreshing touch. But the one secondary character who really got my attention was Hugh Prentiss! I hope, hope, hope that he gets his own romance soon, because he stole every single scene where he appeared. Yes, I fell for Hugh big time people.

Of course there's a big climactic scene where Anne is rescued, although to be fair, she was in the process of rescuing herself when the troops arrived. The climactic scene with the villain and the circumstances behind his reason for persecuting Anne are both over the top, but somehow they fit this Smythe-Smith series -- particularly the rescuing and the troops-to-the-rescue scene. I won't say more since I don't want to spoil it for readers.

I didn't review Just Like Heaven, but can tell you that so far I'm really enjoying this series by Julia Quinn. A Night Like This is just what I expected too, a light, fun, romantic read with lots of great characters. Julia Quinn almost always hits the spot for me with her solid romances, so now I'll look forward to the third book of this fun series.