Kiss of Snow is one of my most anticipated books of 2011! I would like to thank KMont for indulging me and my love of this series by forward her ARC, just so that I could devour this book early. As you'll see below, I loved it!

ARC review with no spoilers 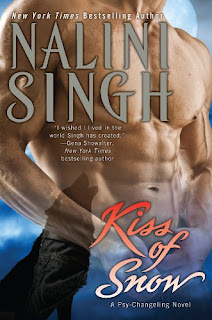 Then Sienna changes the rules and suddenly, there is no more distance, only the most intimate of battles between two people who were never meant to meet. Yet as they strip away each other's secrets in a storm of raw emotion, they must also ready themselves for a far more vicious fight…

A deadly enemy is out to destroy SnowDancer, striking at everything they hold dear, but it is Sienna's darkest secret that may yet savage the pack that is her home…and the alpha who is its heartbeat…

Ohhh, Hawke and Sienna! What can I say about their story? For me, it was most definitely worth the wait. Hawke is as delicious an alpha as I expected him to be and Sienna turns out to be a great match for him. I loved this pairing much more than I expected to, but perhaps I should have known better by now. After all, this is Nalini Singh and she knows how to write an excellent paranormal romance. In Kiss of Snow you'll find tension, lots and lots of sexual tension, plus the romance and more than a few of those hot, sizzling moments that Singh is known for.

We all know by now that Hawke has been trying to avoid Sienna like the plague for years. Hawke thinks he's too old for her, and well... he kind of is! Sienna makes him feel things he doesn't want to feel, and since his mate died at a young age, Hawke believes he can't bond with Sienna. Sienna on the other hand has been fascinated and emotionally affected by Hawke from the moment she joined the SnowDancer pack with her family. These two have been pushing each other's buttons for years, but now that Sienna is 19 years old and back at SnowDancer full time the tension between them is off the charts. Hawke decides to find a female to soothe his wolf, and Sienna decides it is time to get her man.

This is a May-December relationship and the story must be well crafted to make the connection between the characters believable. In Kiss of Snow, Singh uses a fine touch while further developing Sienna's character and her relationship with Hawke. Sienna's character growth can be measured from beginning to end by her actions and reactions, as well as in Hawke's reactions to Sienna.

Sienna is a 19 year old young woman, and toward the beginning of the story that shows both in her uncertainty and actions, but from a young age she also suffered torture at the hands of the Psy and in many ways is older than her years. This aspect of Sienna's character is believable and that for me turned out to be key in making this relationship believable. I love the way that Sienna just blooms once she decides to take control and goes after her man. This is where her incremental growth and self-confidence can be measured as the courtship progresses. It's lovely and very well done.

Sienna is both vulnerable and strong, but Hawke is a delicious alpha and acts accordingly. He's stubborn, possessive, protective, bossy and more... but as always what makes him and his alpha attitude acceptable in this situation is the fact that Sienna calls him out on it and, young or not, takes a stand. I love that Hawke doesn't necessarily back off either, but instead modifies his approach. Smart wolf!

There's a secondary romance between Walker Lauren and Lara, the SnowDancer healer. I loved this romance! Walker was ohhhh so tender and unexpectedly hot! Go, Walker! The segments that told their story did not take the focus away from the main couple's romance, but instead served to break up some of the tension at key moments, plus it was wonderful to get to know this quiet character.

And yes... I loved all the action within the overall story arc. The overall story line moved along, and although in the end it seemed almost like a slow move, many small details are revealed along the way that make an impact. In Play of Passion we saw the Psy Council split, with Anthony and Nikita teaming up to protect their territory against the Scots. In Kiss of Snow, the story arc continues as we see Henry and the Pure Psy make their move against the San Francisco territory and more specifically, SnowDancer. Sienna's powers are revealed in all their agony and glory in these segments which are quite cleverly weaved into the romance.

The whole pack is involved in the action and characters from previous stories are highlighted with key contributions. I particularly loved Judd in this story as he continues to grow in depth and breath as a character. The cats from the DarkRiver pack also play key roles in the romance and battle. There's a lovely thread involving the kitties that I won't spoil, but look for it! It is lovely.

I enjoyed the last few books of this series and remember loving Play of Passion. However for me, Kiss of Snow ranks up there with my very favorites of this series Slave to Sensation, Caressed by Ice and Branded by Fire. I love the way Singh extends the courtship between Hawke and Sienna throughout the story to make it a believable one, the sexual tension is off the charts and the payoff is worth it! The Psy/Changeling series is ten books long and for me it's still going strong. I'm still in love with the Psy and the Changeling characters in this series and can't wait to read that next book.

My Psy/Changeling series reviews:
Mine to Possess, Book 4
Branded by Fire, Book 6
Bonds of Justice, Book 8
Posted by Hilcia at 12:17 PM