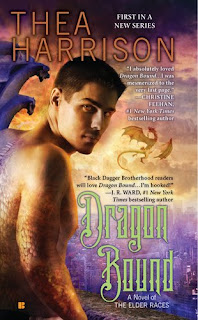 Half-human and half-wyr, Pia Giovanni spent her life keeping a low profile among the wyrkind and avoiding the continuing conflict between them and their Dark Fae enemies. But after being blackmailed into stealing a coin from the hoard of a dragon, Pia finds herself targeted by one of the most powerful–and passionate—of the Elder Races.

As the most feared and respected of the wyrkind, Dragos Cuelebre cannot believe someone had the audacity to steal from him, much less succeed. And when he catches the thief, Dragos spares her life, claiming her as his own to further explore the desire they’ve ignited in one another.

So yes, I picked up Dragon Bound by Thea Harrison and had tons of fun reading it last week. Fun! This was a fun, solid paranormal read. I loved the overly alpha dragon and the banter, plus it was hot and sexy.

In the beginning I didn't think the world building was anything to write home about, what with the Fae and Goblins, the older than old, bored-to-death dragon, the half-breed Wyr young woman who captures his attention, and the whole New York setting that reminded me a bit of Nalini Singh's Guild Hunter's world for about a second. However, quickly enough I began to really enjoy this world Thea Harrison created with its different Elder races, magic, humans and all the struggles that go along with those tricky relationships.

The best part of this fast-paced story for me was the dialogue between the two characters. The banter that developed between Dragos and Pia was excellent. Dragos was such a beast! He was portrayed as an over-the-top, uber alpha dragon who just didn't know how to filter what came out of his mouth. Pia was no better. She called it the "lunatic in her," and it made for some great dialogue between these two.


"Pia." He spoke like the words were ripped out of him. "Don't you dare leave me. I swear to God, I will follow you into hell if I have to and drag you back by the hair."

One corner of her mouth lifted. She put her hand over his on her cheek. She said, "You say the most god-awful things."

And he did. He really did say the most awful things throughout the book! As old as he was, the beast never learned the meaning of the words finesse or romance, and Dragos was "born along with the solar system" -- that's old. Twenty five year old Pia, whom Dragos refers to as "a baby, nothing but a moment, a heartbeat," teaches him a thing or two along the way. Talk about a May-December romance!

Dragon Bound turned out to be a great read for me with a few niggles here and there. There were a couple of open-ended threads and unexplained events within the story line, as well as one big thread to do with Pia's shifting that just kind of fizzled at the end. And although Pia held her own against Dragos, I thought she tended to be more submissive than strong. But none of these niggles were enough to spoil the fun for me. I also really enjoyed the secondary characters in this book, particularly Rune, Graydon and Tricks, so you know I'll definitely read the second book in the series, Storm's Heart.