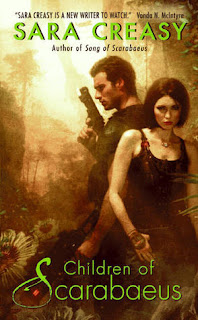 Edie Sha'nim believes she and her bodyguard lover, Finn, could find refuge from the tyranny of the Crib empire by fleeing to the Fringe worlds. But Edie's extraordinary cypherteck ability to manipulate the ecology of evolving planets makes her far too valuable for the empire to lose. Recaptured and forced to cooperate - or else she will watch Finn die - Edie is shocked to discover the Crib's new breed of cypherteck: children. She cannot stand by while the oppressors enslave the innocent, nor can she resist the lure of Scarabaeus, the first world she tried to save, when researchers discover what appears to be an evolving intelligence.

But escape - for Edie, for Finn, and for the exploited young - will require the ultimate sacrifice...and a shocking act of rebellion.

Children of Scarabaeus picks up where Song of Scarabaeus left off, with Edie in need of neurotoxin and the Crib fast on their heels. Edie and Finn are captured again, except this time it's the Crib and Natesa that take them and some of the same problems previously faced by these two are reprised. The Crib uses Finn's leash against Edie and she will do anything to keep him alive, even if she has to give up her dreams of freedom.

Natesa is working on Project Andra and soon Edie discovers that the Crib is using children from her home planet of Talin to work on the project. But as this project begins to falter and other massive scientific failures throughout the galaxy come to light, Scarabaeus once again becomes the focus for the Crib and Edie and Finn find themselves on their way to that planet.

The repetition of events, the capture and the way Finn is used against Edie, was disappointing to me. That whole story line just felt too familiar, too soon, even though the events take place on a different ship and this time it's the Crib instead of rovers that do the torturing.

Slavery is a thread in this story, as Finn, Edie, the children and even Natesa are portrayed as nothing more than slaves to the Crib in one way or another. Of the children I loved Galeon, a 7 year-old boy who steals every scene where he appears. Even though he's brilliant, he acts like a child and humanizes this story and in the process does the same for both Edie and Finn. This little boy manages to touch Edie and even the too practical Finn.

I still loved the planet Scarabaeus and how it evolved by the time our protagonists' return, and of course the creepy-crawlies that still abound there. The sci-fi details are carried through in this installment from the last book and the world building continues at a slower pace. The romance does permeate this story more so than in the first installment, although again it is slow going and more on the realistic side of things. I liked that the romance doesn't take the focus away from the sci-fi storyline and yet the connection between Edie and Finn can be felt throughout.

The final resolution takes place in the planet of Scarabaeus and it's both exciting and climactic. I liked the way Ms. Creasy works all the world building and character details into the ending. Although again as in Song of Scarabaeus, the secondary characters don't have the depth I prefer to encounter in such stories, the main characters do make up for that flaw. There are sci-fi and plotting details galore in this book, however the plot meanders a bit and is not as well defined as that first book.

Children of Scarabaeus is definitely worth reading, there are no plot holes, the world building is tight and all ends on a satisfying note, even though there's also a feeling of deja vu at that point. The romance aspect of the book is well integrated into this story, as Ms. Creasy uses a combination of sensual tension, yearning and a realistic touch to build on the already established relationship. This is another solid science fiction romance installment by Ms. Creasy and, although I wish the end of this two-book series had been more exciting for me, I definitely look forward to reading her future works.