Review: The Summer We Came to Life by Deborah Cloyed 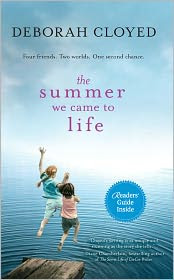 Every summer, Samantha Wheland joins her childhood friends—Isabel, Kendra and Mina—on a vacation, somewhere exotic and fabulous. Together with their mixed bag of parents, they've created a lifetime of memories. This year it's a beach house in Honduras. But for the first time, their clan is not complete. Mina lost her battle against cancer six months ago, and the friends she left behind are still struggling to find their way forward without her.

For Samantha, the vacation just feels wrong without Mina. Despite being surrounded by her friends—the closest thing she has to family—Mina's death has left Sam a little lost. Unsure what direction her life should take. Fearful that whatever decision she makes about her wealthy French boyfriend's surprise proposal, it'll be the wrong one.

The answers aren't in the journal Mina gave Sam before she died. Or in the messages Sam believes Mina is sending as guideposts. Before the trip ends, the bonds of friendship with her living friends, the older generation's stories of love and loss, and Sam's glimpse into a world far removed from the one in which she belongs will convince her to trust her heart. And follow it.

The Summer We Came to Life by Deborah Cloyed is her debut novel. This is a book that left me with mixed feelings and deep thoughts about life, death, friendships, family, love and more. Although I'm sure many consider this novel women's fiction, for me it had a more literary flavor, perhaps because of the style in which it is written, the prose, and the depth with which the different subjects are approached.


Birth and Death are the two occurrences in a person's life that seem to say one thing: we are not the ones calling the shots. "The only consolations are love and best friends." That's what Mina told me two days before she died.

That's how this story begins and right there is the substance of this story. After losing Mina, Samantha herself feels lost, and grief and guilt make her question a lifetime of personal decisions. She wants to grieve on her own but her friends won't allow it, and Isabel, Jesse, Lynette, Cornell and Arshan come down to Tegucigalpa, Honduras to help her go on. All of them, including Isabel and Kendra go through the grieving process, consolidating their friendship and love, and going through a journey of self-discovery and personal growth. Mina seemed to have been the axis around which the rest of the friends rotated and although dead, she is very much a part of their rough journey.

Through Samantha's character and quantum physics (and what some would call magical realism), Cloyed goes forth in her attempt, a creative one if I may say so, to disprove the fact that "we are not the ones calling the shots." You'll find references to both the Copenhagen Interpretation and the Many World Theory -- which theorizes that there are "a number of parallel universes, and everything that could possibly have happened in our past, but didn't, has occurred in the past of other universe or universes."

However, although science is very much a part of this quest, there's also a mixture of interesting characters in this story. Isabel is half-half Panamanian/American, Kendra is half-half African American/White and Mina's parents were born in Iran with Samantha being the red head American in the group. The author uses this mixture of races and cultures, as well as the setting in Honduras, to address racial and cultural differences. And as if that were not enough, while relating their personal experiences, the Baby Boomer parents in the story also get into history as the reader is treated to their personal struggles and first person points of view on the 1960's U.S. Civil Rights struggle, the Iranian Revolution and South American politics, as well as and the struggle of the Garifuna population in Honduras where the group of friends is staying.

There's a generational theme in this story. The parent's older generation making a connection with the younger one by imparting experiences often fraught with controversial subjects, but flawed or not, all leading in one way or another to lessons in life and love. The friendship and bond between Sam, Isabel, Kendra and Mina is deep, the connection between them supposedly making them stronger. Instead I found them to be fragile, fragile to the point of brittleness and therefore easily broken and in need of saving. The younger women's sense of hopelessness weighs heavily for most of this story, even through the lighter moments.

As you can see this is an ambitious undertaking by Ms. Cloyed, and although the four friends are there as characters, as is the journey of the self, this not necessarily your typical women's fiction read. This is where my mixed feelings come in about The Summer We Came to Life, as some of its strengths can also be considered its weaknesses. At one point there are as many meaningful subjects discussed or debated as there are shifts in points of view. Those constant shifts were problematic for me through the beginning of the book, and even a few times later when I sunk into the story. On the other hand, I quite appreciated Cloyed's creative blending of magical realism (if magical realism is her objective) with science, and found both her prose and in-depth characterization to be excellent throughout.

Finally I'll say that The Summer We Came to Life is not an easy read, but it is one that made me think and that's always a plus for me. This is Deborah Cloyed's debut novel and it's very good in my opinion. I would like to see what comes next from this author.