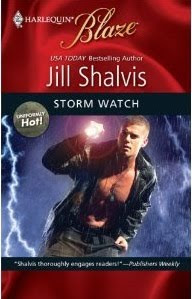 After battling a hurricane of catastrophic proportions, Jason needs some downtime--badly! But there's no rest for the heroic. During another deluge, Jason's savior skills are suddenly in demand...by his hot friend Lizzy.

She's fiercely independent. But that doesn't keep them from having incredible sex as they, ah, ride out the storm!

Jason knows relationships and duty don't mix. Still, he feels as if he's being swept away by a flash flood of desire for Lizzy.

Storm Watch is a category romance by Jill Shalvis I've had on my "to be read" pile for a while, together with a few others by this author. I've previously enjoyed a few of her categories and looked forward to reading this one.

This is the story of Jason and Lizzy who went through high school together and ten years later meet up again. It's the classic tale of the geeky smart girl who has a secret crush on the gorgeous jock who hurt her feelings. In the middle of a devastating storm Lizzy needs help evacuating her pregnant sister Cece who she's sure did not evacuate and is not responding to phone calls. She goes to her friend Dustin for help and instead finds her old crush, Jason. Within minutes of meeting, Lizzy realizes that after ten years, her crush is blooming again and this time the chemistry seems to go both ways.
Jason is back in town on leave after ten years of working on the National Guard and is still recovering after the death of his rescue partner, Matt. He's in transition and doesn't really know what to do with his life. All he knows is that he needs rest, food and sex, in that order. Instead, he gets a storm, a flood, and Lizzy, his old high school tutor -- a girl who always made him feel more than he could handle.


The timeline for this story is three days, most of it taking place in one day while Lizzy and Jason are on their way to rescue Cece. Jason and Lizzy are kissing ten minutes after they see each other again, and while on their rescue mission it becomes a lurv-fest. I seriously questioned both Lizzy's concern for her sister and Jason's judgment as they indulged themselves on their way. By the time the storm passes and Cece is rescued, there is sunshine and there is love!

There's no question that this is a hot book with a likable hero and an independent heroine with a stubborn streak. However, although Storm Watch has its enjoyable moments and is definitely hot in the signature Harlequin Blaze way, this is a predictable story with a timeline that doesn't allow for real development.