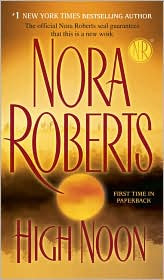 Savannah-Chatham police lieutenant Phoebe MacNamara is one of the best hostage negotiators in the business, and her latest mission involves talking down a suicidal jumper from a building owned by Duncan Smith. Impressed by her cool, courageous actions and intrigued by the sexy woman herself, Duncan charms Phoebe into meeting him for a drink. As a single mother with family demands and a career woman working in a testosterone-dominated field, Phoebe doesn't think there is any time in her busy schedule for romance, but all of her famed negotiating skills can't convince Duncan to give up on a chance for a future with her. When Phoebe becomes the target of a psychopathic killer out to destroy her professionally and personally, Duncan turns out to be just the person Phoebe wants by her side.

I finally read High Noon by Nora Roberts and I'm glad it was a library read. This is one of those books that engaged me throughout, but that in the end left me with a flat feeling that I could not shake. Why?

In Phoebe McNamara, Roberts comes up with a strong, intelligent heroine who is both a great cop and a wonderful woman. She is surrounded by a supportive family that turn out to be a great responsibility as well. Phoebe is a single mother and sole supporter to her child and an agoraphobic mother. After having experienced violence in her childhood and a loveless marriage, in Duncan Phoebe finally finds a man who is both interesting and interested; just in time for someone to become fixated on her and threaten her life and the life of those she loves.

Roberts not only writes a great heroine, but in her inimitable way she makes us care about Phoebe's friends and family and we become involved in all their lives. The suspense is well executed and it develops slowly, as well as the investigation and the romance between Duncan and Phoebe, a romance that was well integrated with the suspense.

So why did I have a problem with this book? The end.  Yes, the suspense was resolved satisfactorily, and Duncan and Phoebe have their "happily ever after" moment, but... but...what happens to the rest of those characters we come to love? What happens to the rest of the situations that were presented in the book as obstacles or conflicts between Duncan and Phoebe? Or Phoebe's personal problems, the ones that were presented throughout the book as personal conflicts? Did they go away simply because Duncan and Phoebe said "I love you?"

The end felt rushed and I had so many questions by the end of this book that in a way it felt incomplete; a dissatisfied feeling. The happily ever after did not do it for me in this case. It did not resolve all the conflicts that were presented because obviously it was not the answer to all the problems. In this case, a book that was well executed throughout fell flat in the end and all those unanswered questions diminished a highly enjoyable read for me.

Visit Nora Roberts here.
Posted by Hilcia at 8:04 AM