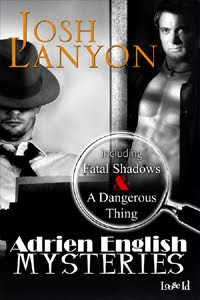 In this second LA-based adventure, bookseller Adrien English arrives at the Pine Shadow Ranch (left to him by a beloved grandmother) to find a corpse in his driveway. But by the time the unfriendly local sheriffs arrive, the body has disappeared.

Who are the mysterious strangers excavating on his land? And will he sort out his problems with LAPD Detective Jake Riordan, heavily into S/M sex but not so hot on relationships? Find out in this engrossing, slyly witty thriller.

This series is getting better. A Dangerous Thing, the second book in the Adrien English Mysteries series, has excellent balance between the mystery/suspense and Adrien and Jake's developing relationship. I love how well Lanyon almost seamlessly integrates the two. The mystery is full of great twists and turns with multiple murders, suspects and red herrings thrown into the mix. I didn't really guess who the murderer was until almost the end; just the way I like my mysteries.

Adrien was well developed in Fatal Shadows, but we only got enough of Jake to wet our appetite. In A Dangerous Thing there's a bit more focus on him, and we begin to see exactly how deeply conflicted he is about his sexuality. Jake is harshly vocal about his beliefs and self-doubts, resulting in uncomfortable situations and not so pretty scenes. Jake is still a work in progress when it comes to development, and I would say he has a long way to go as his character unfolds slowly.

I couldn't help but think as I was reading the story... "Adrien, you lovely man, what are you getting into? Get out while you can!" But as their relationship seems to be deepening, it's obvious that Adrien is going to go for it with Jake... he is cruising for a bruising and that's obvious too. Their intimate scenes together caught me by surprise. I expected passion, but not the tenderness that's obviously the "hook" when it comes to Jake.

I am loving Lanyon's writing, these mysteries, the characters that populate them and can't wait to read The Hell You Say.