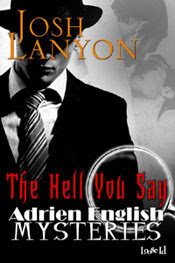 Demons, death threats...
and Christmas shopping.
It's gonna be one Hell of a Holiday.

In the third in the popular Adrien English series, the "ill-starred and bookish" mystery writer has to contend with a Satanic cult, a handsome university professor and his on-again/off-again relationship with the eternally conflicted LAPD Detective Jake Riordan.

Oh my! After I finished reading The Hell You Say by Josh Lanyon, the third book in the Adrien English Mysteries, all I have to say is that I loved this book! I was exhausted by the end.

The mystery was excellent and quite involved; there is a whole sect of Satanists, curses and ritualistic murders. When it seems as if Angus, Adrien's assistant (and resident warlock) at the Cloak and Dagger bookstore is the main suspect, of course Adrien must get in the middle of it all.

The investigation progresses at a slow pace with multiple characters and threads introduced. As opposed to the investigation, the action is quick paced and doesn't slow down from beginning to end. Lanyon again integrates Jake and Adrien's ongoing relationship into his storyline so that the mystery flows and keeps the reader involved, while the personal conflict between the two main characters becomes more complex making The Hell You Say a suspense on both fronts.

Jake and Adrien's relationship was a bit of a roller coaster ride, with a slow, tentative beginning building to a highly emotional end. Their relationship took the expected turn in this book, but I found the journey to be both emotional and quite gripping. There's a definite turning point for Jake's character in this book and in turn one for Adrien.

Jake's decisions, his actions and reactions fit him and I think Lanyon took a risk with this character -- an excellent risk. In my opinion, anything else would not have been believable and whatever happens in future books, The Hell You Say had the perfect ending. However, I can't help but hope we get more Jake in the next book and see the consequences to his actions.

There are other factors I didn't mention previously that also make this series an outstanding one. Adrien's quick wit and amusing internal debates lighten up tense moments at the most unexpected of times. There are also unforgettable secondary characters that make the series feel complete. Their interactions with Adrien provide some unforgettable moments. My favorite so far? The often hilarious exchanges between Adrien and his interfering, overprotective and relentlessly manipulative mother Lisa.

The Hell You Say was a beautifully written book that provided a thrill on all fronts. I'm thoroughly hooked and going on to read Death of a Pirate King!