Review: Take On Me (Daytime Divas, Book 1) by Sarah Mayberry 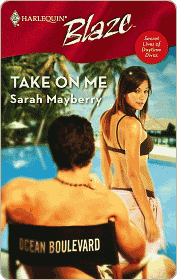 In Take on Me, the first book in the category romance Daytime Divas series, Sarah Mayberry begins with a couple who has a past history. Dylan Anderson was the cool/dumb high school hunk and Sadie Post the shy/plain high school geek.

Their high school history is a predictable one, she had a secret crush on him and he was oblivious, although very much aware of her existence, and of course things didn't end up well for them. While Sadie unwittingly hurt him deeply, Dylan purposefully humiliated her during prom night and neither ever forgot the hurt or the humiliation. Mayberry takes this predictable storyline and turns it into a fun, hot read by using the enemies-to-lovers trope.
Years later, Sadie and Dylan end up working together on the popular soap opera Ocean Boulevard's writing team. Let me tell you, these two cannot stand each other! She still can't keep her eyes off Dylan, but resents the heck out him, and now he can't keep his eyes off Sadie, but can't abide the woman. This is where all the fun begins! I love the witty, sarcastic dialogue between Sadie and Dylan... the internal hateful thoughts that cross their minds while they lust after each other, and the steamy sexual tension that just builds from all that hostility.


Whenever she'd cast him in one of her revenge fantasies, he'd always been balding and paunchy, with a pronounced stoop. Sometimes she even gave him missing teeth... But unfortunately for her, the years had been kind to Dylan. Not just kind, generous. Really, really generous.....

This book is funny and hot! And I mean funny moments right in the middle or after their sexual encounters.

After the deed is done:


All the while she tried to ignore the warm throb between her legs. While every other part of her was cringing with regret over what had happened, her vagina was lying back, smoking a cigarette and vibrating with smug satisfaction.

The "hate/lust"part of this story is resolved midway through the book and that's when the deeper development of the relationship really begins. Mayberry fleshes out these characters and this relationship while still having them go at it like bunnies -- after all this is a Blaze so they must.
The pacing during the second half of the book slowed down, and I missed that fast pace and tension that really had me going during their "hate/hate" lust-filled exchanges. Overall, Take on Me was a solid fun read with lots of steam and a sweet ending.