October is here and that means Halloween! From the books I've read lately and some read a while back, I have accumulated a few recommendations of books you might want to read: Paranormal Romance, LGBT Speculative Fiction, Horror, and well... things with fangs, claws or some that go bump in the night.


The first book in the Vampire Empire trilogy has some of the scariest vampires I've seen around in a while. I really enjoyed the fact that they are Nosferatu-like vampires, parasitic, violent and portrayed as animalistic and clannish in nature. The humans are also portrayed quite differently in this world, and for the two main characters it's a learning experience as they venture into the world of vampires in the northern lands where they rule. There's a princess, a masked and caped hero, horrifying vampires and violent, often fast-paced battles, plus the beginning of a sweet romance that develops between two very different people. Along with the first book, I will recommend The Rift Walker (Vampire Empire #2), a book that I'm reading at the moment, and where the fun, chilling adventures continue.


Weather you begin this series from scratch or decide to pick up where you left off doesn't matter. This is a series that I highly recommend and that is appropriate for this month with it's angel-like Guardians and demons, hell hounds, heaven-like Caelum, and vampires. There's a lot to be said about Meljean Brook's world and it's all good... it's complex, tight, and fascinating. The romance and heat are off the charts and I can't recommend it enough.


I just reviewed this collection of stories and highly recommend it. All the stories included are excellent: there are vampires, flesh eating zombies, stories about the occult, mermen, a mesmerizing psychic, a clown!, surfer dudes and dudettes, and well... romance and love along with all the hmm... weird fantasy.


Oh boy! Did I enjoy this collection by Cardamone or what? This is one fantastic collection of spec-fic stories where Cardamone includes both horror and fantasy. His stories are shocking and nightmarish, and if you love those ambiguous endings that leave you holding your breath at the end you'll love these. I read it last year and will be re-reading some of the stories again this October. :)

This is spec-fic of the horror, homo-erotic kind. The best kind. It's exciting and disturbing with demons, vampires, angels and witches equally doing their thing among humans and with each other. MacLeod and Valentine's series escalates and gets better and better as it goes along. But you don't have to believe me (I only wrote an ini-Mini), I've linked you above to Indigene's reviews of this series. She reviewed all four books when the series was first released a few years back and in my opinion, these are still the best reviews about this series out there. This series has had a resurgence in popularity recently after it was re-released by OmniLit. 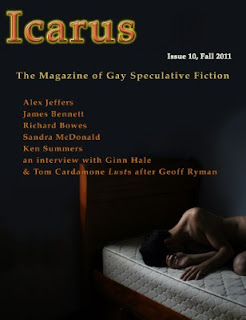 There are many excellent Speculative Fiction books out there to read! I've slowly become an addict of this sub-genre, horror and fantasy in particular. For LGBT fans, Lethe Press' quarterly magazine, Icarus: The Magazine of Gay Speculative Fiction, is a great way to check out short stories by new or favorite writers, interviews, reviews, news about upcoming releases and of course networking information. So, I usually end up browsing through their book catalogue which has great choices. The upcoming fall issue has an interview with Ginn Hale who has the popular serial The Rifter out now. I've only read and reviewed the first episode from that series and am holding off on the rest. :)

So where do you look for new speculative fiction, horror, fantasy, new writers and upcoming books, LGBT or otherwise? What about books in general? What have you read lately that you would recommend as a great Halloween, October read?
Posted by Hilcia at 3:58 PM