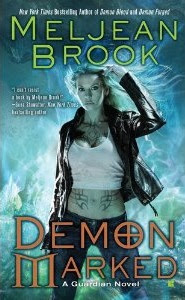 In this stunning and sexy addition to the world of the Guardians, a man seeks revenge against the half-demon he once loved...

Nicholas St. Croix is familiar with the evil of demons. After his father's death, he was raised by the demon who had taken over his mother's body. Six years ago, his "mother" was responsible for the disappearance of the woman he loved, and Nicholas swore he'd find her--even if he had to go to Hell and back. Except she finds him first--and with one tormented kiss, he knows that she, too, is a demon. Now he is determined to take his revenge.

Ash is a half-demon with no memory of her past or how she got to Hell. All she knows is that Nicholas St. Croix holds the key to her identity. And though he's clearly drawn to her, Nicholas makes no secret of his distrust of her. Yet one kiss at a time, he breaks down her defenses as they battle an array of demons and Guardians. But is Ash's greatest enemy the man at her side?

The Guardian series is a favorite paranormal series and Meljean Brook a favorite writer. I look forward to all her new releases and Demon Marked is no exception. Demon Marked is book number 7 in this series, so if you haven't read the previous books expect a few spoilers.

Nicholas St. Croix was introduced in the last installment Demon Blood as a human whose life became hell on earth after a demon took his mother's place and basically raised him. By the time she was done, Nick's father had committed suicide and Nick's lover Rachel had sacrificed her life to save Nick's. He lives only for revenge and in the hopes that Rachel had been turned into a Guardian because of her selfless sacrifice. When we meet Nick again, the only thing that has changed is that he has become even more ruthless and coldly focused in his search for revenge.

Ash wakes up in a mental institution with no memory of where or who she is. Eventually, after six months of not speaking, she remembers part of her name and slowly begins to exhibit strange behavior and powers that scare nurses, the psychiatrist and other patients. The one thing that's evident is that Ash is very different, exhibits no emotions and has a totally flat affect. Memories flicker on and off and when the psychiatrist won't help, she leaves the institution and ends up at Nick St. Croix's house. The two meet and although she looks like Rachel, both Nick and Ash know that's not who she is. They strike a bargain, Nick will use Ash to lure the demon who killed his mother, and Ash will use Nick to figure out her identity.

At the beginning of the story Nicholas and Ash were quite cold and it took me a while to warm up to both of them. Ash in many ways seemed lifeless and almost robotic, and Nicholas's obsession with revenge made him into a detached and ice cold man with little to no feelings but cold rage. I shouldn't have worried though, Meljean Brook certainly thawed them out nicely. Soon, there were enough human moments between them and surprisingly amusing dialogue to make Demon Marked worthy of this series.

Ash's character warmed up slowly and believably, and Nicholas' thawing personality changed with enough doubt intermixed with his growing feelings for Ash, that it was believable as love and passion grew between them. Although the fiery passion in this book is not as hot as in Demon Forged, as always, Brook revs up the sexual tension and there's a great payoff when the characters finally give in to passion.

The overall story arc worked out well for me with one exception. I found the outcome of Nicholas's revenge against the demon predictable. However, the way the story line is twisted to work in Michael's situation is rather well done. It's quite nice to see characters from the series make appearances as secondary characters, without them taking too much of the focus away from the central characters. It's always great when Lillith and Hugh make an appearance. However, Khavi is still a mystery, isn't she? I still believe that her methods are highly questionable.

I also have many questions as to what the Guardians are doing and how they compromise their principals to achieve their goals. In this particular story the sacrifice of good souls for the one. Thinking back to Lillith and Hugh's story (Demon Angel) at the very beginning of the series, it seems as if somehow the Guardians have been derailed from their true purpose and in many ways they've become as manipulative as the demons, even as it is understood that their whole structure needs change to survive. But how far are they willing to go? It says a lot about Meljean Brook that such gray areas have been building up slowly and are up for debate and about to climax at this point in this paranormal romance series.

I am especially looking forward to Michael's story, as by addressing the very nature of that character's duality the above questions should be answered. However, how Meljean Brook goes about doing so? Well... talk about high expectations!