Hey, two posts in one day! I've been away and missed you all... but I've had a few family emergencies that have kept me away from it all lately. We all had a tough month trying to deal with the facts of life and death after a family member was diagnosed with pancreatic cancer early in August and passed away this last week. I've been away from home for almost a week again and just got back. I hope to catch up with all of you soon after I recuperate and get some much needed rest.

But first, well... I haven't highlighted new releases during this whole crazy, busy summer that took over this year. However, summer is almost over and there are quite a few books in September that I'm looking forward to reading and would love to highlight. 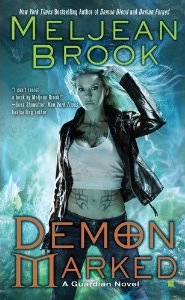 
Nicholas St. Croix is familiar with the evil of demons. After his father’s death, a demon took over his mother’s body and raised him. Six years ago, his “mother” was responsible for the disappearance of the woman he loved, and Nicholas swore he’d find her—even if he had to go to Hell and back. Except she finds him first—and with one tormented kiss, he knows she too is a demon. Now he is determined to take his revenge…

Ash is a half-demon with no memory of her past or how she got to Hell. All she knows is that Nicholas St. Croix holds the key to her identity. And though he’s clearly drawn to her, Nicholas makes no secret of his distrust of her. Yet one kiss at a time, he breaks down her defenses as they battle an array of demons and Guardians. But is Ash’s greatest enemy the man at her side?

I love, love this paranormal series by Meljean Brook! It's one of my top two favorite PNR series and I've found myself anxiously awaiting this book's release this whole year. I heard that an end to this series has been announced and as much as I love it, I'm fine with that. I prefer a good ending to a great series, than a slow and tortuous death. For me, this is a series that hasn't lost its momentum or appeal. I will read this book as soon as it hits my Kindle on September 6th! 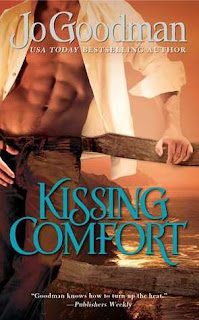 
Bode DeLong knows that his playboy brother Bram isn't really in love with Miss Comfort Kennedy, even though it's clear that she's enamored with him. With Bram's motives for the engagement suspect, Bode figures the safest place for Comfort to be is in his arms. Now, Bode just needs to convince Comfort that the childhood fancy she has for his brother is no match for the incredible desire that sparks between them every time they touch.

I love my western historical romances (although I don't read nearly enough of them!) and Jo Goodman is one of those authors whose new releases I look forward to reading. Kissing Comfort has been on my list for a while and will definitely be read this month. 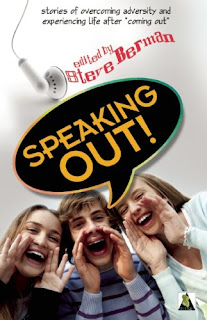 
Speaking Out features stories for and about LGBT and Q teens by fresh voices and noted authors in the field of young adult literature. These are inspiring stories of overcoming adversity (against intolerance and homophobia) and experiencing life after "coming out." Queer teens need tales of what might happen next in their lives, and editor Steve Berman showcases a diversity of events, challenges, and, especially, triumphs.

This is an anthology that looks great not only because the authors involved are really excellent writers, but because of the content and its importance and relevance for LGBTQ young adults. I'm looking forward to reading all the stories... but hey, some favorite authors are included: Rigoberto González (From Macho to Mariposa Anthology), Alex Jeffers (The Abode of Bliss), Steve Berman (Vintage: A Ghost Story), Jeffrey Ricker (Fool for Love Anthology and New Normal), and Sandra McDonald (Diana Comet and Other Improbable Stories). I'm looking forward to "discovering" new favorites in there too. 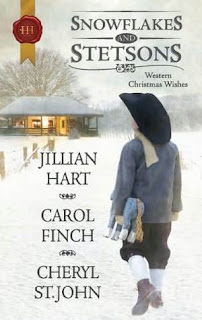 Wrongly imprisoned, Caleb McGraw is finally free—but the bitterness he holds still makes him feel trapped. Until he sees the beautiful Caroline holding a little boy with eyes just like his own. Discovering his long-lost son is just the start of Caleb's Christmas miracles!

One Christmas night, outcast Lucas Burnett finds a silver-haired angel buried in the snow. But Rosalie Greer is no pale spirit—she's a fiery, independent woman, as wild as the mustangs Lucas breeds. Can she be the one to finally thaw Lucas's frozen heart?

A Magical Gift at Christmas by Cheryl St.John

Meredith has always dreamed of a grand life but, stranded on a train in heavy snowfall with two young stowaways, she unexpectedly finds she has everything she needs with just one strong man to protect her….

Again, I love my westerns, and a good cozy, warm holiday story set in the historical west does it for me too. This anthology features a story by Cheryl St. John, and well... she has become a favorite author for me in the past couple of years because she writes those wonderful Harlequin historical westerns so full of love and warmth and that makes this a read to look forward to already. I haven't read anything by Carol Finch or Jillian Hart before, so those will be new-to-me authors this year and I always look forward to "discovering" those. :)

Note: I have TWO release dates for this book. Well... I found two of them and it can be a bit confusing... Goodreads has September 20th and Amazon has October 1st. I usually go with Amazon's release date, but if you're interested in reading this anthology I suggest you begin looking for it after September 20th. 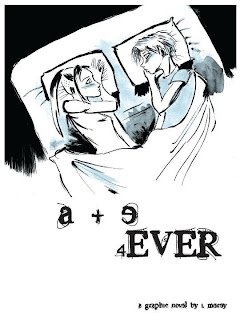 
Asher Machnik is a teenage boy cursed with a beautiful androgynous face, boys punch him girls slag him and by high school he's developed an intense fear of being touched. Art remains his only escape from an otherwise emotionally empty life.

Eulalie Mason is the lonely, tough-talking dyke from school who befriends Ash. The only one to see and accept all of his sides as a loner, a fellow artist and a best friend, she's starting to wonder if Ash is ever going to see all of her...

a + ɘ 4EVER is a graphic novel set in that ambiguous crossroads where love and friendship, boy and girl, straight and gay meet. It goes where few books have ventured, into genderqueer life, where affections aren't black and white.

This is an LGBTQ young adult graphic novel I have for review from Lethe Press. I haven't read a graphic novel in a long while, this one just looks really good. I've skimmed it a few times, but I'm really looking forward to settling down and reading it from beginning to end. 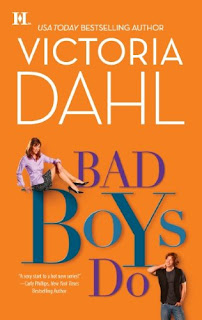 
Olivia Bishop is no fun. That’s what her ex-husband said. That’s what her smart bob and glasses imply. And with her trademark determination, Olivia sets out to remake her life. She’s going to spend time with her girlfriends and not throw it all away for some man. But when an outing with her book club leads her to a brewery taproom, the dark-haired beauty realizes that trouble – in the form of sexy Jamie Donovan – may be too tempting to avoid.

Jamie Donovan doesn’t mean to be bad. Sure, the wild streak in his wicked green eyes has lured the ladies before. But it’s time to grow up. He’s even ready for a serious romance. But how can that be when Olivia, the only right woman he has ever met, already has him pegged as wrong.

Have you read the first book in this contemporary romance series? It's Good Girls Don't, and it's definitely a solid and true contemporary romance -- when I say "true" I mean nothing chic lit(ty) about it. I'm really encouraged by the fact that I've read a few of those this year. I DO love my women's fiction... and a good "chic lit(ty)" book hits the spot here and there, but, but, but... contemporary romance novels are my bread and butter, my chicken soup, my comfort reads, my all time favorites and I've MISSED THEM!! So this is a good thing. :D


♥♥♥♥♥♥
What about you? What books are you looking forward to reading in September? Any good recommendations?
Posted by Hilcia at 4:16 PM