Review: The Abode of Bliss: Ten Stories for Adam by Alex Jeffers 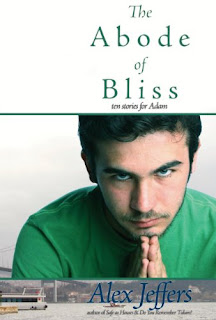 Explaining himself to himself and to the man he loves, Ziya tells Adam the stories of his life:

Intricate as Ottoman miniatures, Ziya's stories reveal a world unsuspected: the world we live in.

Prior to The Abode of Bliss: Ten Stories for Adam, my personal experience with Alex Jeffers' works was limited to reading Do You Remember Tulum? Novella in Form of a Love Letter. I admit that reading that one magnificent piece by this author left me with high expectations.

The Abode of Bliss: Ten Stories for Adam is a compilation of ten self-contained short stories, some which have been previously published. Pulled together in this book, each story becomes a chapter where Ziya, as the narrator, gives his lover Adam a detailed, uncensored account of his personal journey as he attempts to make sense of events and people that influenced or changed his life.

Jeffers focuses much of his in-depth exploration of Ziya's character by slowly unraveling family relationships, and through them and their history, Turkish culture. Ziya's family is financially well off, educated, seemingly stable and strays from Muslim tradition only to a certain extent. The truths, secrets and betrayals that Ziya finds and experiences within his family reflect life as it evolves around him.

Ziya begins his narration with "A Story from Childhood," a seemingly simple story that takes place in 1974 when as a seven-year-old he is vacationing with his family at their home in the coastal town of Bodrum, Turkey. That was the year his brother Mehmet went through the circumcision ritual and the Greeks, led by the military junta and its colonels, threatened to invade Turkey after the events that took place in Cyprus. This chapter firmly pulls the reader into the story as Jeffers establishes the rich setting and atmosphere, and while maintaining the focus on Ziya, introduces key secondary characters.

However, it is in the second chapter, "History," that the main focus of the story is established. This is where as a fourteen-year-old Ziya is enlightened as to what he wants for his future self. Ziya is bilingual. He dreams of attending Harvard and of excelling as a Turkish writer who writes in the English language, nevertheless after taking a tour of the sultans' palace Topkapı Sarayı and visiting Dar-üs Saadet - the abode of bliss -- he weaves in other dreams. This is where he witnesses one single moment of unparalleled happiness between Ben and David, two American men traveling together. As the nature of the friendship becomes clear, Ziya knows he wants that happiness in his own life.

This realization combined with personal discoveries, dissatisfying, and heartbreaking betrayals and experiences connected with the different ways in which sex (not love) between men are regarded by his fellow countrymen, make up the framework for this story as a whole. As Ziya faces a future wherein his faith and love for his family and culture are unwavering, but one that might be different from that of his beloved brother Mehmet, he has to come to terms with the fact that he might have to make some tough choices in order to become the man he needs to be. But, is it worth it? His journey will take him from Turkey, through Europe, and finally to Harvard and America.

Jeffers' is not a straightforward tale. Instead, he has a roundabout style of getting to the point, gathering all the pieces of the puzzle and allowing them to fall into place at the right moment. He reveals the details of his main character's life by peeling one layer at a time while maintaining the reader engaged. Jeffers' prose is intricate and his writing lush and richly descriptive. He plays brilliantly with language, as a single word (or in some cases, words) takes on a deeper significance by the time a chapter ends. At other times, as in the chapter titles "Kindness" and "A Person," it is immediately apparent. However, his focus on language is found throughout the book.

One of the aspects I love about this book is that Jeffers transports the reader to place and time without effort and creates an atmosphere that changes with the setting throughout the story, even as the narrator's voice remains distinctly unchanged. The reader is caught unaware at the most unexpected of moments, giving key revelations a certain shocking value because of the almost nonchalant way in which those moments are narrated. As an example: there's a lack of violence, even when the act described is violent, that tends to leave the reader breathless for that one moment and makes a stronger impact.

In The Abode of Bliss: Ten Stories for Adam, the stories, all ten of them, come together and fit beautifully without the repetitiveness that I've encountered in similar works where collections of short stories are pulled together to form one book. And what of my high expectations? I am happy to say that those were met, and then some. This is a fabulous work of fiction by Alex Jeffers and one I highly recommend.

Other works by Alex Jeffers:
Safe As Houses
Do You Remember Tulum?
The New People
Posted by Hilcia at 2:30 PM