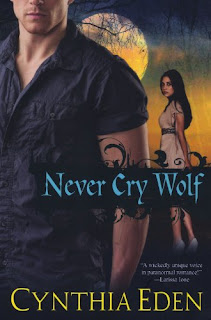 Lucas Simone is not the kind of guy you mess with. He's big, he's strong, and his eyes hint at a wilder side most women can't handle. Of course, that's because his predatory instincts are no metaphor-he's a genuine Grade-A top-quality werewolf, tough enough to fight his way to dominance over the scariest pack on the West Coast. There's only one chink in his armor. Unlike most alpha dogs, Lucas has a reputation for protecting the weak and innocent.

Sarah King is counting on that protective impulse-it's the only thing standing between her and certain death. There are only two problems: one, she's not quite as innocent as she'd like Lucas to believe. And two, if he doesn't stop stoking Sarah's animal lust, it's only a matter of time before her own wild side gets unleashed...

Never Cry Wolf is the fourth book in the Nightwatch Series by Cynthia Eden, but stands on its own quite well. I've not read the other books on this series and had no problems following the story.

Sarah King is on the run and she's counting on Lucas Simone to protect her. Sarah is a charmer whose gift allows her to read wolves's thoughts when they're in animal form, and Lucas is the big tough Alpha of the West Coast pack. She can be an asset to him and figures if anyone can save her from her ex-boyfriend Ralph, it is Lucas .

Lucas can't resist the beauty even though he knows she's not trustworthy and offers her the protection of his pack. Sarah does give him valuable information about a planned coup to take over his territory. According to Sarah, the coyotes are about to break their pact with Lucas and Ralph is at the heart of it all, and the circumstances prove her right. But Sarah is full of secrets and lies. Can he trust her, even though he can't resist her charms?

This was a fun paranormal romance, full of shifters, action and hot, sexy moments. Lucas is the typical alpha's Alpha, with the overprotective instincts and macho attitude. Of course when he falls, he falls hard and that makes it worth it. I always love it when an alpha falls hard for a girl. Sarah is sexy, smart, and she also falls for Luke, but she's a liar and it takes most of the story to redeem her character.

In the meantime, there's lots of action, both in and out of the bedroom. They must prepare for an upcoming war, but that doesn't stop Lucas from claiming Sarah as often as he can, or Sarah from giving in as easy as pie, even though she previously experienced abusive sex with a shifter. But hey, this is Lucas and he's hot!

There are two distinct sections to the story. The first is the shifter section with the set up for the romance where Sarah and Lucas begin the bonding process and both the pack and the upcoming danger are presented to the reader. However, that takes them to the second section of the story. Lucas' life is in danger after he is shot with a silver bullet and he's rushed to a voodoo priestess in the hopes that she'll save his life. This is where the story itself shifts when Eden introduces a different atmosphere by expanding the setting and adds urgency to the situation. I enjoyed this section of the story much more than the first. The action is non-stop, the twists and turns are fun to follow as new characters are introduced, and they all ran around trying to figure out how to save their own lives and that of the pack from the villain.

Never Cry Wolf is a mixed bag -- a pretty standard shifter paranormal romance in that first half of the book, an exciting suspense, action-filled story with new, interesting characters on the second half, and Sarah being the mystery that needs to be solved throughout the whole story. Overall, although the beginning of the book felt like a traditional paranormal romance and my interest wavered a bit, I ended up getting caught up in the story and read it in one sitting. Now I'm curious about the rest of the characters. I hope Ms. Eden will write Josette and Piers' story. And what about Caleb, will he be redeemed? I hope so.