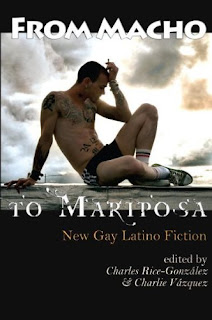 Prepare yourself to dance in a disco in Silver Lake, check out papis in Orchard Beach, cross the border from Guatemala to Mexico on your way to the U.S., see a puro macho bathe in a river in Puerto Rico, make love under a full moon in the Dominican Republic, sigh at a tender moment in an orange grove in Lindsay, visit a panaderia in Kansas, see a full blown birthday party in Juarez, and be seduced by a young artist in the South Bronx. These are some of the stories in this collection of thirty gay Latino writers from around the United States. There are ''don't mess with me''' divas, alluring bad boys, and sexy teenagers, but also empowered youth for whom being queer is not a question and a family that grows wings on their heads. The infectious rhythms of House music in New York City are adjacent to cumbia in Mexico, next to reggaeton in Puerto Rico, alongside Latin pop in L.A. and merengue in an east coast city. But the spectrum of experiences and emotions that inhabit our days gives these stories dimension and gay/queer Latinos a common ground. The stories are vibrantly varied and clearly connected in this ''era of lost signals'' in which we live.

From Macho to Mariposa: New Gay Latino Fiction is an anthology written and edited by gay Latino writers from varied backgrounds and walks of life. That in and of itself was a huge draw for me. As seen from the gay Latino's perspective, I also hoped to find that great mixture of different backgrounds and countries that make up what we call the Latino culture and what makes our community unique.

The anthology is composed of 29 short stories. Individually you'll find different writing styles and types of stories, from the magical cuento, to love letters, and stories of neglect, loneliness, rejection, sex, drugs, and yes... yearning and love. Through the unique and beautiful rhythm found in the blending of two languages and two cultures that is often found in works by Latino writers, the reader experiences pain, joys, highs and lows.

The stories serve as little windows into the gay Latino experience. Some writers go back to their roots and set their stories in the land of their birth or that of their parents: Puerto Rico, Mexico, Guatemala, and the Dominican Republic. These stories serve to set atmosphere and define cultural differences within this anthology. There's La Huerfanita by David Andrew Talamantes, a disturbing account set in Mexico about a little boy who is abused by his father because he's not macho enough... or one of my favorite stories, the beautiful Yermo by Charlie Vázquez, written in letter form, about an unforgettable encounter in Puerto Rico between an islander and a Nuyorican from the Bronx.

Other stories are edgy and creative. There are quite a few of these, however as an example Fairy Tale by Justin Torres is a riveting cuento magico written in the form of a letter to an absent father where fantasy is used to convey neglect, and worth mentioning is A Doomed Gay Marriage where Rigoberto González writes shorts within a short story addressed to "the writer," "the cook," "the musician" and more, depicting reasons a marriage to each in turn would fail.

Among the stories depicting young adult experiences one of my favorite is On the Line by Benny Vázquez. I love the way the writer captures the cultural reality of views and attitudes by family and loved ones toward the two young men's changing relationship through the young man's mami's character. It's a story of friendship and love found and lost in an urban setting. And of course there's Pregnant Boy by Chuy Sánchez, the magnificent story about a boy who has seen and lost too much and yet hopes against hope for love. He is naive and a cynic, an astounding and heartbreaking combination.

The bulk of the stories, however, depict lost loves, past relationships and those regrets that leave empty spaces and "what ifs" behind. I loved Michael Moves to Faile Street by Charles Rice-González, a well-written, and complete story about a man with a need to set things right after having failed his ex-lover, and Requiem Sartajeno by Rick J. Santos pulled me in to the point where I thought I was reading a whole book instead of a short story. However, it was The Fermi Paradox by Ben Francisco that made me say "wow" after I finished it. A story about yearning for lost love while dealing with rejection and hoping there's a way to fill the emptiness left by it all. This was a complete story with excellent writing, pacing, plot and prose that left me wanting more from this author.

Urban settings are quite popular in this anthology, from the East to the West Coast, Chicago to Miami and in between, however there are some stories that do highlight life in those urban settings more than others. Dark Side of the Flame is a dark trip indeed where Danny González explores drugs, sex and loneliness. And, the anthology ends with a bang and on an upbeat note that made me laugh out loud with Orchard Beach by Robert Vázquez Pacheco where Bronx Diva La Joey teaches a mistaken papi a lesson he won't soon forget. "¿Pa' qué fue eso?!"

Taken individually some stories are better written than others and I do have favorites among them -- too few of them are mentioned above. As a whole, however, From Macho to Mariposa: New Gay Latino Fiction is a different kettle of fish altogether. The editors of this anthology Charles Rice-González and Charlie Vázquez successfully capture the differences and commonalities within the gay Latino community and the gay experience from a distinct cultural perspective.

Pulled together, the stories do convey that distinct flavor. Whether it's achieved by highlighting societal views of the gay son, friend, nephew or neighbor within the Latino community as a whole or the importance of la familia -- mami, papi, brothers, sisters, tíos or primos -- the neighborhoods, the different foods or the music, that flavor can almost be felt and tasted by the reader. Most of all I think these gay Latino writers achieve this as only they can by expressing their experiences, with passion, heart and emotion.