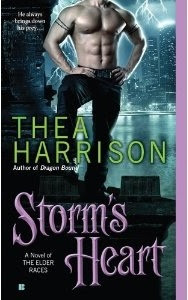 During the rule of her murderous Dark Fae uncle, Thistle "Tricks" Periwinkle found sanctuary among the Wyr in New York. Her ethereal beauty and sparkling personality won the hearts of the public, but after her uncle's death, there are those who don't want to see her ascend the throne...

Able to wield thunder and lightning, Wyr sentinel Tiago Black Eagle has ruled the skies for centuries. His massive build and thunderous power make him one of the Wyr's best weapons. And he's the one sent to protect Tricks when she's almost assassinated in Chicago.

Soon, both Tiago and Tricks will fall prey to the stormy hunger that engulfs them- a passion that will shake the very foundation of all the worlds.

In Storm's Heat by Thea Harrison, the second book in The Elder Races paranormal series, Tricks is on her way to claim the Dark Fae's throne. On her way there, one of her cousins attempts to assassinate her and Tricks winds up alone in a motel room where Tiago finds her wounded and drunk out her mind. After a few disagreements and another assassination attempt, Tiago and Tricks begin the journey that will place them in danger and lead them to the Dark Fae's realm. As the heat builds up between the two, they'll fight an unknown enemy, uncertainty, and their own desire.

I liked Tricks in the first book and was really looking forward to her story. I loved the humor in Dragon Bound, and toward the beginning of Storm's Heat I found some of those same amusing moments. I mean Tricks has some great lines. However, to be frank it didn't take long for this character to become a bit of an annoyance. I found her to be a bit too "pouty," needy and superficial. Her "voice" got on my nerves after a very short period of time and that was not good news!

Tiago is a rather forceful alpha character. He was considered a god in the ancient times... but, unlike Dragos, Tiago is quite the softy and once he falls for Tricks (which is rather fast), all he wants to do is please her. He caves in pretty easily to her charm. The one thing he keeps intact is the overprotective bit... and of course, he is relentless once they mate. I liked Tiago, but didn't fall in love with his character.

My biggest problem with this story, however, would be the romance itself. I don't understand why Tiago and Tricks become attracted to each other all of a sudden after 200 years of having on and off contact with each other. What set it off? Why now? There's nothing in the story that explains this. There's no previous attraction or a hint that there was sexual tension or even an awareness between them throughout those years. Again it's the "mating" device that it's so often used in paranormal romance, but without anything to back up the "romance." Unlike the romance in Dragon Bound, I didn't buy this love that sprouted like mushrooms after a hard rainfall.

Overall I found this to be an average paranormal romance read. This particular installment in the series didn't stand out for me like that first book. When it comes to the next book in the series, I'm not sure that I will be reading it right off the bat either. I wasn't enamored of the vampire Carling, and although Rune seems like an interesting character, I think I'll wait and see.  Grade: C