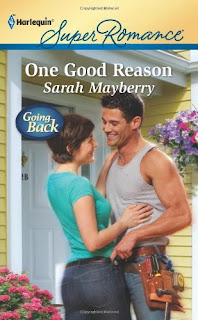 Any day now Jon Adamson will pack his bags and hit the road. After all, his intention was never to hang around Melbourne once he’d settled his late father’s affairs. Yet he hasn’t moved on. And it might have something to
do with Gabby Wade. The not-so-big office manager with the really big attitude is making Jon’s days…interesting…engaging…fun. It’s impossible for him to resist her.

But he knows himself—long-term commitments and cozy family dinners aren’t his style. If that’s what the future holds, why is he still here? And why is he spending all his days—and nights—with Gabby? Because maybe she’s the one reason strong enough to make him stay.

What if you discovered that all you ever wanted were the things you’d left behind?

I'm so glad I read One Good Reason by Sarah Mayberry. After reading The Last Goodbye, I just had to know what happened to Tyler's brother Jon. It was worth it because as it turns out, I enjoyed Gabby and Jon's romance more than Tyler and Ally's.

After his father's death, Jon is still dealing with the fallout. He finds himself at loose ends and unable to work out serious issues from his past that are not allowing him to move forward with his life. Jon sold his business in Canada and doesn't really know what to do with himself, so his brother Tyler talks him into working for him at T.A. Furniture Designs on a temporary basis with hopes that he'll stick around. There, Jon meets Gabby, the shop's administrator and Tyler's right hand woman. Their first meeting doesn't go well and sets the stage for a hostile beginning to a relationship full of tension.

Gabby is a self-sufficient woman who doesn't really want to need anyone. She can do just about everything quickly and efficiently when it comes to the business. But after her long three year relationship with Tyler, Jon's brother, and the way their relationship ended, Gabby is suffering from low self-esteem. She really likes Tyler's wife Ally, but some residual feelings for Tyler linger and she has to deal with those. The last thing she needs in her life is Jon. As far as Gabby's concerned Jon is a silent, overprotective, too controlled man who reminds her of his brother in too many ways.

I like the increasingly hostile way in which Gabby and Jon demonstrate their initial attraction, it makes for a great explosive scene once they release all that hostility. The dialogue between them helps to build all that sexual tension with all the snap and sizzle, especially with Gabby's sass. Jon, well.. he's the strong, silent, passionate type that turns out to be too sweet for words!

Gabby is a bit of a PITA at times with her uber-independent woman of the year personality, although Jon's over protectiveness of her is a bit much toward the beginning, especially when he doesn't really know her. However, she really is oversensitive and overreacts most of the time with Jon. Now, the fact that Jon questions Gabby's sexuality based on her short hair, her lack of make-up, the way she dresses, her hostility toward him as a male, AND that she's having dinner with a girlfriend, is an assholish thing to do to say the least. That he verbalizes this to her in front of others is really idiotic in my opinion.

However, this book is really not about those dumb moments these two (evenly and briefly) share. It really is about both of them coming to terms with their pasts as they fall passionately in love and move forward together. Jon with the abuse he experienced as a child at the hands of his father, and Gabby with feeling unlovable because of the way her relationship ended with Tyler. Mayberry really digs into both of these characters' fears, guilts, vulnerabilities and strengths. She builds on those one step at a time as they first see themselves for who they've become, and then open up to each other slowly and painfully.

Jon's situation in particular is a painful one and Mayberry does a bang-up job of portraying this man's tough and uneasy journey out of the darkness. His yearning and passion for Gabby and for a life with her is heartbreaking. Gabby's combination of strength, vulnerability and insecurities make her quite human and therefore a great female protagonist for this story.

I thought the timeline for the romance was a bit rushed and I'm surprised because Mayberry usually does a better job with this. However, again the characterization is excellent in this book as both Jon and Gabby are well fleshed out throughout that short time-line. The focus on the couple is maintained throughout, although Tyler and Ally do play an important part in this story as they should.

One Good Reason is a solid, sexy, sweet romance that really hit the spot for me.