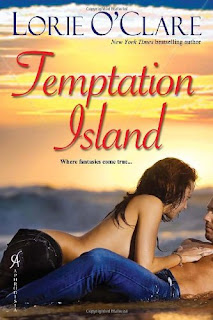 Ric Karaka knows he can transform the rundown plantation house he's inherited into a profitable bed-and-breakfast, but he needs money to get things off the ground. Hopefully he can procure the financing from a wealthy old lady who's coming to Hawaii to meet him for the first time. . .

So it's a shock when the woman who arrives is not only young but gorgeous and incredibly sexy. Ric figures he's got nothing to lose by inviting Jenny to come to the plantation and take a look around. . .

Temptation Island by Lorie O'Clare is an erotic romance with a story. Jenny wins a trip to Hawaii while participating in her Nana's favorite game show Last Chance for Happiness. Nana is the only person left in her life and this makes her happy, so Jenny decides to go on the Hawaiian trip on her own. The flight is late departing and while waiting she meets Samantha, an older wealthy lady who's also waiting to board the airplane. The lady takes a look at Jenny's itinerary and they both realize that there are certain clauses that will make it impossible for Jenny to afford the hotel or expenses if she arrives late to the island.

Samantha orders her assistants to send for her private jet and since she likes Jenny's honesty and candor, she proposes that Jenny go to the island in her stead. All Jenny has to do is meet with the people Samantha herself has in her agenda and then call her with first impressions and thoughts. In return, Jenny can have her Hawaiian vacation. Jenny agrees.

Ric Karaka is one of those people in Samantha's meeting agenda. He's looking forward to meeting with her and hopes she'll fall in love with his banana plantation and agrees to finance his plans to make it a bed-and-breakfast. But there's another more important reason he wants to meet Samantha.

Ric lived in foster care all of his life after his mother died giving birth to him, and after many years of looking found his father's family in Hawaii. Meeting Samantha will give him the opportunity of meeting his maternal grandmother for the first time and he's anxiously awaiting to meet and embrace this woman. Instead at their first meeting he finds Jenny, and his hurt, anger, frustration and feelings of rejection are there for all to see.

I liked both Ric and Jenny. Jenny is from a small town and awed by Hawaii's beauty and the splendor of it all, and she is candid but has excellent insight. She cares about her grandmother and family because she has so little left in that area and appreciates relationships. Ric's childhood and love starved past has scarred him to a certain degree, but he went looking for his family and is forging those bonds with his grandparents, uncles and cousins. He's not too bitter to do so and that's a plus about his character.

Of course the two of them are immediately attracted to each other and there are some really hot scenes in that banana plantation! The two of them do sizzle together with sexual tension and later, once they get going, in their scenes together between the sheets (and out of them). However, I must say that before they get going the first sexual encounter between them is a bit uncomfortable with Jenny saying no, yes, no, yes... and Ric saying yes. That sort of reaction always pulls me out of the moment and this was no exception.

Ric and Jenny do have to deal with more than just his past childhood, the grandmother and their growing attraction. Ric is also dealing with businessmen who want to buy his property and turn it into a resort for the wealthy, limiting income for the local community. Jenny finds herself in the middle of Ric's emotional situation with his grandmother and later on in the middle of his business situation. So there's more than one issue going on in this story and with these characters. I like the way Jenny deals with most of them.