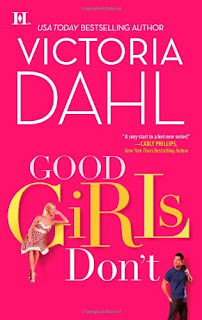 Too much of a good thing…
With her long ponytail and sparkling green eyes, Tessa Donovan looks more like the girl next door than a businesswoman—or a heartbreaker. Which may explain why Detective Luke Asher barely notices her when he arrives to investigate a break–in at her family's brewery. He's got his own problems—starting with the fact that his partner, Simone, is pregnant and everyone thinks he's the father.

Tessa has her hands full, too. Her brother's playboy ways may be threatening the business, and the tension could tear her tight–knit family apart. In fact, the only thing that could unite the Donovan boys is seeing a man come after their "baby" sister. Especially a man like Luke Asher. But Tessa sees past the rumors to the man beneath. He's not who people think he is—and neither is she.

Good Girls Don't by Victoria Dahl is a solid contemporary romance with excellent secondary characters. The central characters are the focus, even when the others make an impact. The main female protagonist is a bit immature, but is both fun and passionate. The dialogue and situations are amusing and keep the reader engaged. There were enough conflicts, both internal and external, to keep me interested in the story from beginning to end.

I loved the scenes between Tessa and Luke, they sizzled with passion and steam. Luke was a man worth having and I love the fact that he doesn't care when the brothers' interfere. He respects them, specially Eric, but not enough to give up the budding relationship he has going with Tessa. (LOL on the virgin scene). I loved that he stood up for his partner too without making excuses or having to give up that relationship for anyone.

Tessa is a first class manipulator and control freak and that's the main crux of her problem in this story. Manipulation and control that come by way of her fear of losing those she loves. She begins small throughout her life until she goes too far. Although fun and a bit of a contradiction because Tessa seems to be a rather sexy and independent woman on the surface, her character tends to be frustrating because of her tendency toward those immature actions and reactions, however, Dahl works out those issues satisfactorily in the end for Tessa and Luke.

Eric and Jamie are both strong and compelling secondary characters. Jamie as the spoiled and rather immature younger brother, fighting to show that he can and has changed, and Eric as the older brother that not only took charge of the business when his parents died in a tragic accident, but raised both his siblings and now has a problem letting go of that parental role.

Overall this is a contemporary romance that I enjoyed reading from beginning to end because of its mostly engaging characters and interesting, amusing circumstances. I'm really looking forward to reading the next book in this contemporary series, Bad Boys Do.

ETA: Thanks to Leslie for her thorough review, it convinced me to read this book. :)
Posted by Hilcia at 8:48 AM