Review: Leah and the Bounty Hunter by Elaine Levine 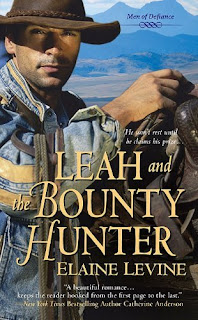 To Leah Morgan's mind, the last thing her hometown of Defiance needs is another gunman stalking its dusty streets—especially one as sweet-talking and fine-looking as Jace Gage. Despite her warnings, the infuriating man seems determined to meddle in her life and risk his own, all for a town that can't be saved and a heart she locked away long ago.

Professional bounty hunter Jace Gage has cleaned up plenty of corrupt towns in his lifetime, and he knows he can handle whatever Defiance's thugs have to offer. But the town's most lawful citizen is another story. Beautiful, willful and exasperating at every turn, Leah is the one person capable of bringing the ruthless gunslinger to his knees—and capturing his desire with a single kiss. . .

Defiance is a town besieged by gunmen and its sheriff. Most of the good men and women have left the town, although there are a few of them still left. Countless men have died in their attempt to kill the sheriff and save the town. Jace Gage, known as the Avenger, is a bounty hunter and known for cleaning up towns single-handed and moving on to the next one. As a last resort, the Marshal sends him in to take care of the gunmen and arrest the sheriff. Unfortunately Jace has also been charged with protecting Leah Morgan while he's in Defiance. After he meets Leah, Jace realizes that this is a task that might ultimately be tougher to achieve than dealing with the sheriff and his killers.

Leah grew up in Defiance and loves the town and its people. It's the only home she knows or remembers. Her mother died there after many years of taking the sheriff's abuse and her mentor Joseph, a mountain man, taught her how to take care of herself in the surrounding mountains. Leah wears men's clothing, shoots and hunts like a man and takes care of providing meat for the town during harsh winters. She is loved and protected by the townspeople of Defiance where she keeps her own little house and maintains the bread baking business that her mother left behind after her death.

This sounds familiar, the gunslinger and the girl dressed up like a boy, right? That's what I thought when I first began reading the book too. However, I was really taken with the characters and the western atmosphere in this story. The first thing that hit me was the "real feel" western atmosphere and the no holds barred violence used in the gun fight scenes, the meanness of the thugs, and the precarious situation in the town. Elaine Levine didn't skimp on those and it really set the stage for the story and for Jace as a character.

At the beginning of the book we're told that Jace is a bounty hunter and a gunslinger for hire, but pretty quickly Levine shows the reader that he's a real killer and a good one. Jace is a man with a tortured past, a past where he was deceived and paid a horrible price for trusting and loving. Leah also has a traumatic past and problems with trust, so it takes these two people a while to get over their baggage, although Leah holds on to hers longer than Jace.

Jace falls hard for Leah! He goes nuts for her. He's a man whose potential for violence and for going off the edge are well documented by Levine. His love for Leah saves him and he's not sure he can survive without it. I love that Jace doesn't really change but that his true personality comes forth with his love, although you can tell that the killer will always be there under the surface.

Leah's love is a bit more complex and I thought conditional. It takes her too long to see under the facade of the man that is Jace -- not that I totally blame her for not wanting a stone-cold killer as her man. Although tough and knowledgeable in many ways, Leah is immature and quite vulnerable as a woman. The way she grew up and the truths she learns along the way are all part of the problem and Levine shows the reader the reasons behind Leah's actions. Jace and Leah deserved to find each other, and I was glad when they found that happily ever after, especially Jace. I really enjoyed their passionate scenes together, which grow in heat as the story moves along.

All in all Leah and the Bounty Hunter is a western historical romance that I enjoyed more than expected because of its excellent atmosphere, good characterization and pacing. I particularly enjoyed Levine's characterization of Jace and the townspeople of Defiance.

Series:
Rachel and the Hired Gun
Audrey and the Maverick
Leah and the Bounty Hunter
Posted by Hilcia at 1:33 PM