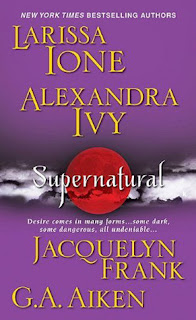 Supernatural is a paranormal romance collection comprised of four stories written by well-known writers. Each story is connected to worlds they've created, where characters from those worlds find their happily ever afters.

In Larissa Ione's Vampire Fight Club (Lord of Deliverance, #1.5), Nurse Vladlena's and the sexy vampire Nathan's tale proves that sometimes revenge is a dish best served hot! This story stands well on its own for those who have not read this series, but it has some interesting tidbits for those who have. Shifters, sexy vamps, demons and plenty of action.

Alexandra Ivy's "Darkness Eternal" (Guardians of Eternity series) is also on the hot side with magic and vamps mixed together. In this novella witch Kata and vampire Uriel find paradise in hell. There is a bit too much of the sexin' going on while this couple is in dire danger, but I do think that the way their plight is resolved is quite creative.

With Kane ( Nightwalkers, # 5.5) by Jacqueline Frank we get more hotness, but this time with lots titillation and revved up sexual tension. Kane knows Corrine is meant for him, but to a demon she's an untouchable human. When he breaks the rules, punishment might just be worth it. I enjoyed the world building in this story, and although I think character development is somewhat short changed in this novella, the characters are both likable and interesting.

Last in the anthology, and easily my favorite story, is "Dragon on Top"(Dragon Kin, # 4.5) by G.A. Aiken. I loved the romance between "kickass" dragoness Ghleanna the Decimator and beta, slightly forgetful Bram the royal. Bram's crushing on Ghleanna from afar is really sweet, but once they get going he's also one of the hottest heroes in this anthology. This is the story with the most involved plot and best character development of the four, as well as the most entertaining with great dialog and secondary characters.

Some of the stories were more enjoyable for me than others, however as a whole all four of them fit quite well into this anthology. Overall Supernatural is a good, sexy collection involving four interesting and very different worlds, hot couples and quick, happily ever afters achieved in that paranormal romance style readers love.