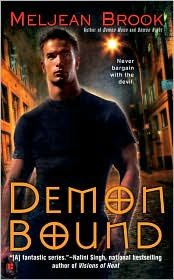 Among the Guardians, Alice Grey is known as the Black Widow—a woman trapped in a web spun by the demon Teqon. To save her soul, she agreed to deliver to Teqon the heart of the oldest and most powerful Guardian of all, or else be damned for eternity. After more than a hundred years, Teqon is calling in his debt.

Jake Hawkins is a novice Guardian whose gift of teleportation could be invaluable to Alice in determining her next move. But in aligning himself with her he never expected to fall in love. Now, their passionate flight to escape Alice’s damnable bargain is threatening both their souls. For they’re about to discover a hellish secret about the Guardians—something that will change their universe forever.

Demon Bound by Meljean Brook was a solid addition to this paranormal series. The hero Jake and the heroine Alice "the Black Widow" were both likable characters that at first didn't seem to fit together. Jake is an extrovert who doesn't think before he speaks. He comes off as young and exhuberant, but there's more to him than just his runaway tongue. Alice, is an introvert and a repressed woman... both sexually and socially. She uses her Gift, that of using spiders, to keep away those around her and has done so successfully throughout the centuries. She can come off as more than a bit creepy at times, and Brook handles that very well through Jake's perspective.
Although this installment is not as sexually explosive as the previous ones by any means, there is a definite connection between Jake and Alice. The best part of the book is that through Alice and Jake's slowly developing romance, the overall storyarc really moves forward in Demon Bound. Brook introduces new intriguing characters that we'll be seeing in future installments, and there are significant revelations as well. The resolution to Alice's conflicts will definitely have a huge impact on all the Guardians and their future. This is a key book in this series that should not go unread.