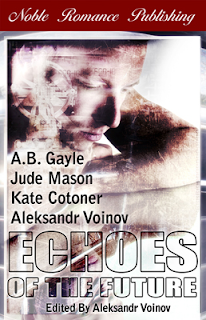 
Flight Lieutenant Chris Waters is the pilot of a cutting-edge unmanned SAD fighter drone that is used for secret government missions. Chris is cutting-edge technology himself: his neural network is upgraded with cyber-technology and software that makes him the interface of his combat drone.
Then, something goes wrong as he connects to his drone. Haunted by strange, disorientating impressions, a so-called 'ghost', he hooks up on leave with fellow pilot Cyril for a night. But Cyril is not the man Chris thought he is, and Chris soon finds out what the 'ghost' in his body really is, as well as the truth about his missions.
Conduit by Kate Cotoner
Ismail and his ex-husband Toki are divided by class and circumstance. Toki is a cybernetic upgrade human and part of the city elite, while Ismail is a baseline human and a cop. Their brief marriage failed when Toki walked out, but now he's back, asking for Ismail's help against Hanuman, a malicious cyber-intelligence who plans to poison the water supply of all baseline humans in the city. Now Ismail and Toki must find the underground reservoir targeted by Hanuman before time runs out for them both.
Rescue Me by Jude Mason
Assigned to guard Leetchi Ambassador Dar and his family, Lieutenant Thomas Patch finds himself inexplicably drawn to Jad, the diplomat’s son. The tall, slender Leetchi turns out to be as gay as Patch and steals his heart. When Jad is kidnapped, Patch goes undercover to find and rescue him. The rescue takes him to the underbelly of the space port city and a whore house where slaves are bought and sold at will. Finding Jad proves easier than he’d hoped, but the rescue takes an insane twist when their escape attempt is thwarted by the one person they knew was on their side.
Will Jad’s enslavement tear the lovers apart? Will Patch be torn from the love of his life? Find out, in Rescue Me.
Reversal by A. B. Gayle
Sebastian is bored. He has another five years of lone duty supervising his family's robots on their space station. The last thing he wants to do is the housework. For Christmas, his mother sends him a Domestic Darling cyborg. True to form, she purchases a factory second and sends one that doesn't quite fit the bill. Instead of being a pert blond with big tits and a cute ass like in the advertisement, this one is six foot tall and built like a Greek god, a very virile Greek God. In an attempt to improve its functioning, Sebastian uses some of his brilliant programming skills. The resulting changes ensure Sebastian will never be bored again.