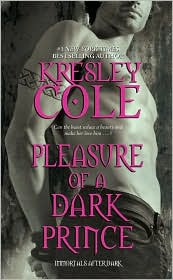 A DANGEROUS BEAUTY
Lucia the Huntress: as mysterious as she is exquisite, she harbors secrets that threaten to destroy her—and those she loves.
AN UNCONTROLLABLE NEED
Garreth MacRieve, Prince of the Lykae: the brutal Highland warrior who burns to finally claim this maddeningly sensual creature as his own.
LEAD TO A PLEASURE SO WICKED. . . .
From the shadows, Garreth has long watched over Lucia. Now, the only way to keep the proud huntress safe from harm is to convince her to accept him as her guardian. To do this, Garreth will ruthlessly exploit Lucia’s greatest weakness—her wanton desire for him. . . .

I was pleased to read Pleasure of a Dark Prince (Immortal After Dark Series, Book 9) by Kresley Cole. I enjoyed it. This is another paranormal series that I'm still enjoying, although some books in this series work better for me than others. I'm so glad Garreth and Lucia's story didn't let me down after waiting for it for so long. Garreth was such a wonderful werewolf character... not brooding or damaged like Lachlain and Bowen, he was fun! Lucia didn't stand a chance, lol! He was also tender and boy did he know how to persevere... not only because she was his mate, but because he learned to love her.

I thought it was interesting that in this story the dark chararacter, the character with the baggage, and I mean dark, drooling, and evil baggage, was Lucia. I liked that, and thought it made for a nice change. As a heroine, Lucia was brave and sexy, but more than a bit frustrating. I could understand her reluctance to trust, but after a while I thought it took her too long to do so. Through that lack of trust, she placed both herself and Garreth in danger and that poor judgment almost caused Garreth his life. However, I understood some of the reasons behind her hesitation and my frustrations with her character did not outweight the fact that I liked her.

Cole introduces some very interesting secondary characters in this installment and I wonder if she'll bring them back and how she'll work them into the storyarc. Cole did an excellent job of working the timeline of Pleasure of a Dark Prince into the overall story. The epilogue turned out to be the beginning of the next book and ended in one big cliffhanger.

Overall an enjoyable paranormal romance with lots of sexually charged moments and a couple with great chemistry, Pleasure of a Dark Prince is a great addition to this series. I do love the way Cole writes her werewolf characters. :)  I'll be reading Demon from the Dark, the upcoming installment in this series releasing August 31, 2010.