Review: Something About You by Julie James 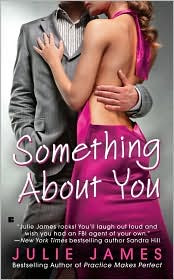 Staying overnight in a luxury hotel, Assistant U.S. Attorney Cameron Lynde overhears a high-profile murder involving a U.S. Senator. Special Agent Jack Pallas is assigned to the investigation-the same Jack Pallas who still blames her for nearly ruining his career three years ago. Now the pair will have to put their rocky past behind them, focus on the case at hand-and smother the flame of their sizzling-hot sexual tension.

Julie James' Something About You is my first venture into a contemporary romance by this author. I have two other books by her on my "to be read" pile, but decided to begin by reading her latest release.

This is Cameron Lynde's story and how events around her, including Jack Pallas' reappearance, affect and change her life. James begins the story with Cameron staying at a hotel room where she's staying for the weekend while her hardwood floors finish drying. She's also attempting to relax after completing a grueling trial. After losing sleep due to the couple in the next room's loud sexual antics, Cameron unwittingly witnesses a murder by hearing it through the hotel room's thin walls. She also glimpses the murderer through the peephole on her room door.

When Cameron calls the hotel's front desk to complain about the noise, a murdered woman is discovered and she is plunged into a crime investigation. The primary FBI investigator turns out to be Jack Pallas, a man whose career Cameron suposedly ruined three years prior. The hostility between the two is tangible from their first meeting as is their attraction.

In this contemporary romance you'll find some excellent details when it comes to Cameron's job, that of an Assistant U.S. Attorney. Ms. James certainly took her time with that part of the book, although not so much that it became overwhelming. Cameron was a witty heroine with friends who liked her and she seemed to win those around her, well... all except Jack. What I liked about this heroine was the fact that she used her head and didn't show poor judgment throughout the story. She followed directions and didn't place herself or those who were guarding her in danger by taking unnecessary risks.

Jack was also a likable hero, he wasn't too alpha or too beta -- just right I would say. He knew his job and did it well. Jack definitely had reasons for resenting Cameron since he was kept in the dark about important facts to do with their pasts.

The "big misunderstanding" is used as a trope in this contemporary romance and once that misunderstanding is cleared up things move quickly between Cameron and Jack. However, that doesn't happen until the last third of the book. The first part of the book -- about two thirds -- is mainly taken up by the criminal investigation, secondary characters who come in and out of Cameron and Jack's lives, and some sexual tension between them. This couple's alone time was limited for a longer period of time than I expected.

Although we know fairly early who the villain of the piece is in Something About You, that part of the story is quite good. The villain was clever and the final conclusion was satisfactory.

Something About You is a good contemporary romance not focused entirely on the couple. The suspense takes a lot of that focus although that part of the book is well executed. The romance is slow to develop, but once it gets going it moves quickly and the chemistry between Cameron and Jack definitely takes off.