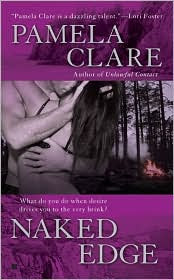 What do you do when desire drives you to the very brink?

The day Navajo journalist Katherine James met Gabriel Rossiter, the earth literally moved beneath her feet. Nearly killed in a rockslide while hiking, she found her life in the tall park ranger's hands. Although she can't forget him she thinks she'll never see him again. She is crushed when she recognizes her rescuer among the law enforcement officers raiding a sweat lodge ceremony one night, throwing her and her friends off Mesa Butte, land they consider sacred.

Gabe long ago swore he would never again lose himself to a woman not even one with long dark hair and big eyes that seem to see right through him. But from the moment he first sees Kat, the attraction he feels is undeniable. Appalled by what he has been ordered to do, he's determined to get to the bottom of recent events at Mesa Butte and to keep Kat safe.

But asking questions can be dangerous almost as dangerous as risking one's heart. And soon Kat and Gabe's passion for the truth and each other makes them targets for those who would do anything, even kill, to keep Native Americans off their sacred land.

The Naked Edge by Pamela Clare is a contemporary romance/suspense I've been looking forward to reading for a while now. I enjoyed some aspects of it, however not as many as I'd hoped. The above blurb summarizes the plot accurately.

In this book Pamela Clare addresses the fight Native Americans are waging against private owners and the government to keep their sacred land and to maintain their traditions. Clare uses Gabriel, a park ranger, and Kat, a journalist and I-Team member, to develop this part of the story. She also uses her ability to integrate the suspense and romance successfully -- this is something I find Clare does quite well.

As a man, Gabriel was deeply hurt and in the process damaged badly. From the beginning, he knew what he wanted from Kat as a woman and marriage was not it. I enjoyed his internal dialogue in this book where he upbraided himself for his base feelings and emotional cowardice -- if nothing else, he was honest with himself. I appreciated his growth in his relationship with Kat and liked the way his feelings moved from lust to love. The reader goes through the whole process with Gabriel. However, I did question his judgment when it came to his role as a protector in the suspense part of the story.

Kat is a character we met in previous books and one that turned out to be an absolute surprise -- at least to me. Kat is not the strong, confident woman I expected. Instead, she turns out to be a shy, vulnerable virgin -- or as Gabriel refers to her "extra virgin" (as in olive oil) -- for personal reasons, she has decided to wait until she marries to have sexual relations with a man. This sets up the conflict between Gabriel and Kat.

Kat is half Navajo and half white and as a result of some heavy traumatic childhood experiences, she lacks confidence both as a woman and as an overall person. However, that's not the reason I say she's not strong, my problem comes with the fact that Gabriel spends most of the story rescuing Kat (I lost count), or you find Kat crying for one reason or another. After a while, the fact that she keeps putting herself in dangerous situations, the constant rescuing, and the crying almost did me in.

I also question Kat's qualifications as an investigative reporter. This is not a new problem when it comes to this series, I had this problem with another book. In my opinion, Kat is a poor investigative reporter indeed. She puts everything together at the end, but her methods are appalling and her abilities to work things out are next to non-existent.

The rest of the I-Team make appearances in this book as expected. Both Julian and Hunter played a part in the investigation and I really enjoyed both their banter and their contribution to the story. Clare works with both the expected and unexpected when it comes to the villains in this installment.

Visit Pamela Clare here.
Posted by Hilcia at 11:50 AM