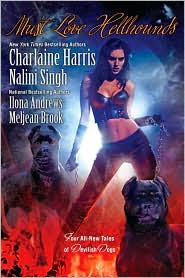 The Britlingens Go To Hell by Charlaine Harris
Batanya and Covache, two Britlingen Collective bodyguards are contracted by Crick to go to Hell. He needs to collect an object he stole from Lucifer but left there while escaping from imprisonment. Batanya is assigned this dangerous duty by her superior Tovis, who seems to be obsessed with harassing her.
In this world, witchcraft is enhanced by science and the witches facilitate transportation for the bodyguards. Batanya, Covache and Crick battle their way through the dark and dangerous tunnels of Hell and on their way meet Hell's monsters, Amelia Earhart, Narcissus and two hellhounds.
This is my first Charlaine Harris read and I'm afraid neither the story nor the writing grabbed my attention. The addition of Earhart and Narcissus to the story came out of left field for me and threw me out of the story. This novella was the weakest in the anthology for me.
Angel's Judgment by Nalini SinghIn this pre-quel to Angel's Blood, we meet Sarah before she becomes the Director of the Guild of Hunters. Angel's Judgment is Sarah and Deacon's story.
Deacon is the Slayer for the Guild. A position so secret, it is known only to the Guild Director and now to Sarah. His job is to hunt rogue Guild hunters -- those who kill vampires instead of returning them to their masters. In this story, Deacon and Sarah join together in the battle against a rogue who is killing vampires -- this right after Sarah is offered the position as Guild Director and comes under scrutiny from the Archangels. During their battles, they encounter an angel, vampires and of course Lucy, the hellhound.
Sara and Deacon's mutual attraction and sizzling chemistry is apparent from the start. Their attraction is one that may conflict with their future professional relationship.I thought both the action and the romance were well done in this story.
I liked the characters and the story kept my attention. We were not given as many details as expected about the Guild Hunter's world, although what we did learn was relevant. Elena and Raphael both make brief appearances and neither has much of an impact on the story.  A nice addition to this series, Angel's Judgment gives us a closer look and some added development to some important secondary characters in this UF/Romance series.
Magic Mourns by Ilona Andrews
Magic Mourns is a novella related to Ilona Andrews' Kate Daniels urban fantasy series. Andrea Nash is a knight in the Order of Knights of Merciful Aid and Kate's best friend. She's also a shapeshifter in denial. The story picks up a few weeks after Magic Strikes ends, while Kate is recuperating from her wounds and Andrea is covering for her at the Order.
In Magic Mourns, Andrea and Raphael, the sexy werehyena who has been courting her for six months, embark in their own harrowing adventure. They battle the three-headed Cerberus, Hades' hellhound, and must figure out why he left the gates he's supposed to be guarding. In the process, Andrea must come to terms with her feelings for Raphael and with her own secret monster.
This story is told through Andrea's point of view, a refreshing way of seeing this character story and adding further development. Here, as in other Kate Daniels books we encounter mythology -- this time of the Greek kind. Fast paced and full of action, Ilona Andrews delivers a complete story with a couple of characters I loved and some great action.  This story was a winner for me.
Blind Spot (A Guardian Novella) by Meljean Brook
In this novella by Meljean Brook, Maggie "Winters" and Geoff Blake are thrown together when Katherine, Geoff's sister, is kidnapped. Maggie's loyalty is in question as the two of them joined by Mr. Pup, a three-headed hellhound, take off after the kidnappers for the rescue.
A family secret that has been guarded and is only known by Colin, Savi, Katherine and Geoff is revealed. Maggie and Geoff discover each other's attractions while they race to save Katherine and prove Maggie's innocence.
I'm not familiar with this series and this is my first book by Ms. Brook. I found Blind Spot easy to follow and loved both the characters and world they inhabit. Ms. Brook's portrayal of Maggie and Geoff as both vulnerable and strong made them a winning couple for me. I'll be looking up the rest of this series.
I usually read anthologies to discover new writers, to make decisions about a new series or to follow series I'm already reading. I discovered a new-to-me series I want to read, and loved the added development to two series I'm already reading.  Must Love Hellhounds was definitely a successful read for me.
You can find out more by visiting the authors:
Charlaine Harris, Nalini Singh, Ilona Andrews and Meljean Brooks.
Posted by Hilcia at 6:20 AM