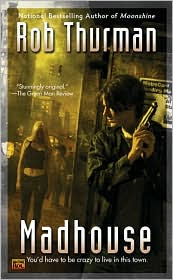 Madhouse is the third installment in the Cal Leandros urban fantasy series.
After we finished reading Moonshine, the 2nd book in the series, Nath and I continued chatting as we started reading Madhouse -- we couldn't seem to stop talking about Cal and Niko. Originally, we thought of posting a combination review of both the 2nd and 3rd books. However our discussion was so extensive, eventually Nath had to split it up into two separate posts.
If you're interested in this series and would like to read our buddy review for Madhouse, you can find it at Breezing Through.
A big THANK YOU to Nath for chatting, discussing, and reviewing the first three books of this series with me. I had the best time!
Posted by Hilcia at 12:00 AM