Review: Tempt Me at Twilight by Lisa Kleypas 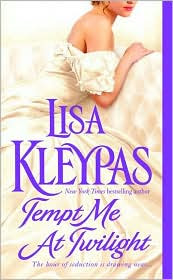 He was everything she'd sworn to avoid...
Poppy Hathaway loves her unconventional family, though she longs for normalcy. Then fate leads to a meeting with Harry Rutledge, an enigmatic hotel owner and inventor with wealth, power, and a dangerous hidden life. When their flirtation compromises her own reputation, Poppy shocks everyone by accepting his proposal -- only to find that her new husband offers his passion, but not his trust.
And she was everything he needed...
Harry was willing to do anything to win Poppy -- except to open his heart. All his life, he has held the world at arm's length...but the sharp, beguiling Poppy demands to be his wife in every way that matters. Still, as desire grows between them, an enemy lurks in the shadows. Now if Harry wants to keep Poppy by his side, he must forge a true union of body and soul, once and for all...

I've been following the Hathaway series by Lisa Kleypas and looking forward to reading all about Poppy Hathaway and Harry Rutledge. After finishing Tempt Me at Twilight I found that I liked some parts more than others. I read this book in basically one sitting and found it to be a quick read that concentrates mostly on Poppy and Harry's romance. That's what drives the book and what kept me reading.
In Tempt Me at Twilight the relationship doesn't really develop until after the marriage takes place. Harry is attracted to Poppy immediately and wants her for a few reasons -- he's attracted to her physically, her intelligent conversation and bright personality are a "curiosity" to him, plus he thinks she'll be an asset to him as a hostess for his business. He's ready for marriage and for the first time, Harry is interested enough in a woman to consider taking the leap. He then proceeds to ruthlessly manipulate the situation so he can have what he wants.
Poppy is on the rebound and heartbroken when Michael Bayning doesn't propose marriage. Michael's father, Lord Andover, thinks Poppy is beneath them socially and not an appropriate candidate as a wife for his son. Michael doesn't have the fortitude to go against his father's wishes and Harry promptly takes advantage of the situation, compromises Poppy and asks her to marry him. Poppy agrees to marry Harry even though her family disapproves of him. However, once they are married, the relationship takes quite a while to develop, especially from Poppy's side. Poppy likes Harry, but he is the one who is totally bowled over -- it definitely takes her time to appreciate and then love Harry. I enjoyed the sexual tension and thought the heat between them was worth the wait.
Harry Rutledge is portrayed as both manipulative and ruthless, but I liked that he was upfront about it. He lets Poppy know from day one exactly the type of man he is, and that type of manipulative honesty almost always wins me over. Not a black and white kind of man, he has more enemies than friends and doesn't really care one way or the other. He fights for what he wants and gets it. In this case, he wanted Poppy. Was he ruthless? Yes. Did I mind? No, I thought his was a flawed and likable character. I particularly liked that Harry was capable of tenderness and exposed his vulnerable side to Poppy. More than character growth, I thought Kleypas revealed Harry's character. He is still manipulating and ruthless at the end, but the characteristics that made him the right man for Poppy were always there. Poppy just needed to discover them.
Poppy was also a revelation in many ways. In the previous installments I never connected with her -- she was just... there. But Poppy comes alive in this story from the beginning. She wants the "normal, predictable" life she never had as a Hathaway -- this is what drives her. Poppy initially falls in love with Michael Bayning because she thinks he can provide her with that normal, predictable life she craves. She's refreshingly smart and I thought charming, bright, and quite naive -- maybe too naive. In Poppy we do see character growth and I liked that Kleypas had that growth come from both her love for Harry and from Poppy's insights into herself.
The Hathaway family was nicely brought into the picture and the hotel staff contributed to the story, without overwhelming or taking away from the romance. Leo and Ms. Marks were highlighted, but Beatrix is the one who caught my attention. She seems to be developing into an interesting and eccentric character. I thought there were times in this story where she exhibited more insight than Poppy -- in a Dr. Doolittle kind of way.
I was frustrated during the last third of the book when I thought Poppy's naiveté bordered on lack of insight. For example, by that time I thought she ought to have had a better idea of how to deal with Harry and how he felt about Michael. The purpose of the short suspense plot included in this part of the book also frustrated me and escaped me since by then, every one's feelings were out in the open.
I can't end my impressions of Tempt Me at Twilight without mentioning Leo and Catherine Marks. After reading the revelations at the end of the book, I was left wondering why the hostilities between Harry and Catherine were so over the top at the beginning. Those same revelations again become part of the convenient family ties that Kleypas seems to be weaving into this series. And, I must say it -- was it necessary for the epilogue to leave that bit about Leo and Catherine dangling? Did we really need the tease? It wasn't necessary for me, but I'll be waiting for the next book to find out what happened.
You can visit Lisa Kleypas and read an excerpt for Tempt Me at Twilight here.
Posted by Hilcia at 12:00 AM