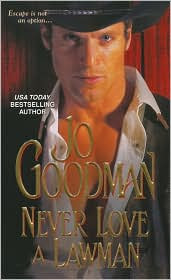 Never Love a Lawman is set in the small mining town of Reidsville, Colorado and the events take place in 1882. A spur of the California & Colorado Railroad Company (the C&C) is the only thing keeping it from becoming a ghost town. Those short railway miles linking Denver to Reidsville give the miners and townspeople access to goods. In turn they use the railway as a fast and efficient way to transport their gold and silver.
Clinton Maddox, owner of the C&C and a partner with interest in the Reidsville's mines, is dead. This death sets up a chain of events and like falling dominoes, plans set up by a clever and manipulative Maddox start falling into place. The import of this death to the people of Reidsville is enormous as his grandson and presumed heir, Foster Maddox, has been making questionable changes to the company and is an unknown.
Wyatt Cooper, the Sheriff of Reidsville came west following his father's footsteps. He is sharp and tough -- a lawman through and through -- but also a man of layers whose sense of humor and responsibility kick him a notch above the hero whose obvious passions rule the day. Wyatt takes care of the town and its people as if they were his own, and is willing to do what it takes to ensure their safety and future. Rachel Bailey is about to find out just how far he's willing to go.

Rachel is Reidsville's newest resident. She moved to town over a year ago and although readily accepted, she remains a self-contained woman who prefers her own company. A talented seamstress, she is both admired by the men for her beauty and respected by the women for her skills. She is friendly, but not too friendly, to all except for the Sheriff -- she avoids him at all costs. Unfortunately for Rachel, Clinton Maddox's death is about to change all that. Upon Maddox's death Rachel becomes the unexpected heir to both his interest in the mine and the railroad spur with one condition: in order to inherit, she must marry none other than Wyatt.

Jo Goodman develops Rachel and Wyatt's relationship slowly. These two people don't know or trust each other when they are thrown together by these unexpected circumstances. They circle each other, get to know one another and in the process become friends before acting on their attraction. The dialogue between them is witty and sharp enough to keep the story interesting throughout.

Wyatt is the type of man who makes his moves deliberately at times and goes by the seat of his pants at others, but he has enough insight to know how to deal with Rachel. He seems to know when to use his sense of humor, determination, sensitivity or just plain common sense to win more than one argument and smooth more than one awkward moment. Rachel on the other hand, doesn't really seem to know what to make of Wyatt.

I loved that Rachel was portrayed as an intelligent, independent woman with a sharp-tongue and a dry sense of humor. A woman who was willing to pay a painful price for maintaining her loyalty to a friend, Rachel was an admirable heroine whose past made her strong, but whose vulnerabilities I could also understand. She was the type of woman who was not easily convinced, but whose love was worth winning and waiting for.

Wyatt was just right too. He pushed Rachel but didn't really expect to get away with anything. He knew she would put him in his place sooner rather than later. He was both tough and vulnerable. This was a great couple. I loved the sexual tension and passionate interludes, their witty and joyful relationship... but most of all the friendship that got them to their happy ending.

Having said that, Never Love a Lawman would not be the same without the well-defined secondary characters that abound in the story. From "that no-account Beatty boy" to Rose, Adele and Molly, you'll find a full set of characters in this book that make a whole town come alive. They are the ones that make this romance and the story complete.

The events set off by Clinton Maddox's death are convoluted and the twists, turns and action are well done. The resolution at the end had the drama expected of a western with the Sheriff and his posse, a villain, trains and lots of happy endings.
A western romance with all the ingredients to satisfy my taste, Never Love a Lawman, with Rachel, Wyatt and company, is already a favorite.
You can visit Jo Goodman here.
Posted by Hilcia at 5:52 PM